With more than a thousand varieties of grapes used to make wine, it's probably no surprise there are so many different types of red wine. This includes popular red wine varietals, such as Cabernet Sauvignon, Merlot, and Syrah, as well as many others.

Cabernet Sauvignon is both a red wine grape and the name of the wine varietal that is made from the grape. It is one of the best-selling varietals of red wine in the United States. Cabs are generally big, full-bodied, and tannic, and the wines made from them can age for years. You'll find Cabernet Sauvignon in both single-varietal wines and wine blends including French Bordeaux blends, American Meritage blends, and Italian super Tuscan blends. You may also find Cabernet Sauvignon blended in lesser amounts into wines such as Chianti and Priorat.

Like Cabernet Sauvignon, Merlot is both the name for the red wine grape as well as the single-varietal wines made from the grape. These medium-bodied wines are less tannic than Cabernet Sauvignon and are often blended with other grapes to bring softness and complexity to a finished red wine. Well-known wine blends that may contain Merlot include Meritage, Bordeaux, super Tuscans, and Priorat, among others. 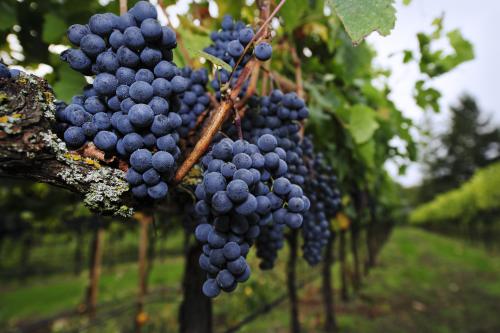 Pinot Noir as a red wine grape and varietal rose to prominence in Burgundy wines from France, and it's also grown and produced in the United States. Oregon's Willamette Valley is adept at producing stunning and powerful Pinot Noir wines, and Sonoma County and Napa Valley also produce world-class Pinot Noir wines. Interestingly, Pinot Noir is also one of the grapes found in Champagne and sparkling wines as well. Pinots are typically medium to light bodied with a soft tannic structure. Pinot Noir is not commonly blended with other grapes, although in Burgundy (Bourgogne) wines, it may be blended with a small amount of the Gamay grape. In Germany, you'll find Pinot Noir wines labeled as Spätburgunder and Frühburgunder.

Jammy, fruity, and spicy, Syrah is a grape that can take on different characteristics depending on terroir and growing conditions. It's a full-bodied single varietal wine, and it's also found in many blends from around the world. Chile, Australia, California, Washington State, and the Rhône region in France all produce single varietal and blended wines containing Syrah. For instance, popular Syrah blends include Côtes du Rhône, Hermitage, and Côte-Rôtie wines from France, as well as GSM (Grenache-Syrah-Mourvèdre) blend wines from Australia and the United States. You may also find it blended into Italian super Tuscan wines.

Zinfandel wines run the gamut in flavor characteristics and range from big and hearty to light and delicate. They are primarily single varietal wines, often produced in the United States with particularly stellar varieties coming from Sonoma County. Zinfandel isn't used in a ton of blends, but you may find it blended with the Petite Sirah grape or in some blends. In Italy, Primitivo is actually the same grape as Zinfandel, so wines labeled Primitivo are also Zinfandel wines.

While it is primarily recognized as an Italian wine grape found in Chianti, Sangiovese is also grown in other wine regions, such as the United States, and used to produce single-varietal named wines. Other wines that contain Sangiovese as either the primary grape or in blends include super Tuscans, Brunello di Montalcino, and Vino Nobile di Montepulciano. This red wine is more on the earthy side in flavor characteristics with medium tannins and high acidity. 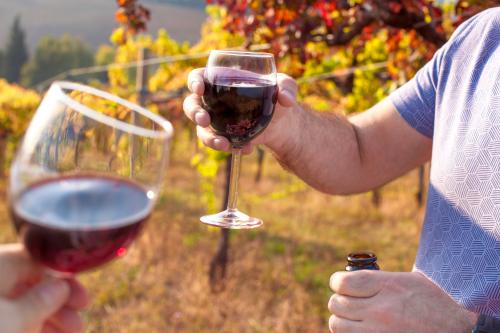 The Nebbiolo grape can be found labeled as the varietal, but it's mostly found in Italian wines from Tuscany including Barolo and Barbaresco. Nebbiolo is a medium-bodied wine with strawberry characteristics and powerful tannins. Nebbiolo wines can often be aged for longer than a decade because of the powerful structure the tannins provide.

Known in Spain as Garnacha, Grenache is often earthy, smoky, and soft. You'll find these wines labeled as a single varietal, but it's also a great blending grape found in many of the world's greatest wines including Spain's Priorat, GSM from Australia and the US, and many blends from France's Southern Rhône region including Châteauneuf-du-Pape and Côtes du Rhône. You'll find Grenache also grown and labeled as single varietals in Australia, the United States, and other regions from around the world.

Malbec is growing in popularity as a wine varietal, particularly in South American wines from Argentina. Malbec is a medium-tannin wine with flavors of cherries and cocoa. It's also grown in France's Bordeaux region and found in Bordeaux wines from the Right Bank as well as in France's Loire Valley. 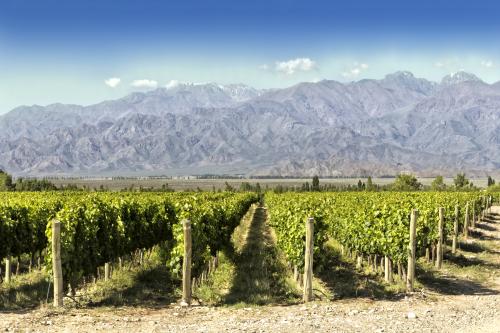 As a varietal red wine, you'll find Carménère from Chile. It has raspberry and peppery flavors. There's also some Carménère in blends such as Bordeaux and American Meritage wines.

Barbera is a grape and wine varietal that comes mostly from Northern Italy. It's a low-tannin red with soft plum flavors and zingy acidity. Barbera is almost exclusively used as a single varietal wine, and you will find some wine regions outside of Italy produce Barbera wines.

Cabernet Franc originated in France and is used in single varietal, Bordeaux wines, and Bordeaux-style blends from around the world. It may also be blended in small amounts in Chianti, super Tuscan wines, and Meritage style wines. Cabernet Franc has medium-tannins with flavors of plums, berries, and spice.

Types of Red Wine From Around the World

While it's impossible to list every red wine in the world, there are many common reds to learn about. Many are blends with the grapes used to make the wines governed by labeling laws.

Bordeaux wines must come from the Bordeaux appellation of France. Labeling and winemaking laws govern the types of grapes that can be used to produce Bordeaux wines. Red Bordeaux wines coming out of one of the best-known wine regions in the world are rich and complex.

Grapes found in Bordeaux blends include:

Burgundy wines are another French labeled wine named after the region in which they are produced and governed by labeling and winemaking laws. Red Burgundies are complex and have flavors of ripe dark berries. They are some of the most expensive and sought-after wines in the world. While Burgundy is primarily Pinot Noir, it may also have some Gamay grapes blended in for balance.

Beaujolais is a sub-appellation of Bourgogne in France. The wine is labeled for the region, and labeling laws govern how the wines are produced and what grapes are included. There are two types of labeled red Beaujolais: Beaujolais Nouveau and Beaujolais. Both are fruity wines meant to be drunk fairly young. The primary grape used in Beaujolais is the Gamay grape, although the wines may also contain small amounts of Pinot Noir.

Châteauneuf-du-Pape is a sub-appellation in the Southern Rhône region of France. It is almost always a blend of grapes, although you can find a few Châteauneuf-du-Pape wines that are made strictly from the Grenache grape. It's a smoky, earthy, lightly fruity wine that pairs well with food and can have good aging structure.

There are 13 grape varietals permitted in red Châteauneuf-du-Pape.

Also from France's Rhône is the blended wine Côtes du Rhône, which is labeled based on the name of the appellation (AOC). These wines are affordable, spicy, and full-bodied wines that make a great table wine.

There are many varieties of grapes allowed in Côtes du Rhône, although at least 40 percent must be Grenache noir.

Another Rhône Valley AOC wine, Côte-Rôtie is spicy, elegant, and fragrant. They are complex wines with nice red berry fruitiness.

Two grape varietals are used in Côte-Rôtie, one red and one white.

Hermitage is also an AOC in the Rhône Valley, and it produces big, collectable reds that can be aged for decades. These are rich, savory wines with flavors such as black fruits and leather.

One red and two white varieties are allowed in red Hermitage wines.

Chianti comes from Italy's Tuscany in the Piedmont region. It is a DOCG (Denominazione di Origine Controllata e Garantita) region with many subregions. Chianti must contain 70 to 80 percent Sangiovese (depending on the subregion), although it may have one of a few other approved varieties blended in smaller amounts. Chianti is a fruity, medium-bodied, acidic wine that pairs really well with spicy foods and tomato sauce, perfect for Italian cuisine.

Grapes in Chianti wines may include the following.

Barolo and Barbaresco are two DOCG regions in Piedmont with one big thing in common: the Nebbiolo grape. The wines are big and tannic and made to age for years; but they're also surprisingly delicate with medium-bodied fruit flavors such as strawberry. Barolo is often referred to as the "king of wines," and the wine can be quite expensive and sought after.

Approved grapes in Barbaresco and Barolo include the main grape and three "clones" of the varietal.

Often referred to as simply Amarone, Amarone della Valpolicella is a wine and the name of the DOCG located in and around Verona. The grapes used in Amarone are partially dried, so the juice is highly concentrated resulting in a lush and dense wine with dark or dried fruit flavors and zingy acidity. The wines must be made with 45 to 95 percent Cruina or Corvina grapes.

Approved grape varieties in Amarone include:

Lambrusco wine tastes like slightly fermented, lightly fizzy grape juice. It's a DOCG region as well as the name of a grape. The wines can range from dry to sweet.

Varieties of grapes allowed in Lambrusco include:

Vino Nobile di Montepulciano has DOCG status, and the wine doesn't contain the Montepulciano grape, but it is grown in Montepulciano, Italy. It is minimum 70 percent Sangiovese. It's a high-acid wine with dark fruit flavors and medium tannins.

Super Tuscan is really more of an affectionate nickname than a wine name, but there is a group of red blends from Tuscany that emerged that have been labeled as such. These blends include non-traditional varietals that have been grown in the region in recent years, and there is great variety among the wines depending on the blends.

Sometimes just called Brunello, Brunello di Montalcino is a DOCG wine grown in Montalcino in Tuscany. It is made up of 100 percent Sangiovese and local Sangiovese clones. It is acidic with medium tannins and flavors such as sour cherry and figs.

Rioja is Spain's most famous wine. It has strong tannins with fruity flavors such as cherry. Named for the Denominación de Origen Calificada (DOCa) wine region, Rioja can contain multiple grapes although the main grape is Tempranillo.

Authorized grapes in Rioja include the following:

Priorat is also a Spanish DOCa making full-bodied reds primarily from the Garnacha (Grenache) grape. It's an accessible and delicious red with flavors of cocoa, smoke, and red fruits.

Grapes used in Priorat include:

Meritage wines are primarily found in the US (the term originated in California), although you may find them from other regions, as well. The wines contain Bordeaux blend grapes.

Sweet red wines and dessert reds are a growing category in red wine. There are no laws governing the types of grapes used, although typically a sweet wine will have lower alcohol and higher residual sugar content.

Be Open to New Tastes

When looking for a perfect bottle of red wine, be open to trying a little of everything. Try a Cabernet from Italy or a Pinot Noir from Spain. These wines may not be the most famous or popular from Italy or Spain but that doesn't necessarily mean they are bad wines. So, be open to new tastes and trying new things. You never know what hidden gem you will uncover.