Never before has a movie caused mainstream audiences to talk so much about wine. The 2004 film Sideways, set in Central California wine country, is credited with improving Pinot Noir sales across the country, enhancing Santa Barbara winery tourism, and piquing the interest of casual wine drinkers everywhere.

The Buzz and Wine

So, what is the buzz about? Sideways is the humorous tale of a weeklong road trip through wine country by divorced -- and somewhat morose -- unsuccessful writer and uninspired teacher Miles (Paul Giamatti) with his soon-to-be-wed friend Jack (Thomas Haden Church). Miles is a wine connoisseur and a frequent visitor to many of the wineries and restaurants nestled in the valleys of the scenic Central Coast. The movie juxtaposes down-on-his luck, yet comic Miles' difficulties in his love life, career and finances with successful actor Jack's happy-go-lucky search for a last fling or two. The duo spends time with a pair of passionate and intelligent women, Maya (Virginia Madsen) and Stephanie (Sandra Oh) to share food, wine, laughs and more wine. The story, while not earth-shatteringly innovative is tight, smart and incredibly funny. Doses of slapstick-style humor pepper Sideways, yet the film manages even a hysterically funny scene with a raging naked man on a running chase without degrading the intelligence of the audience.

So, how did Sideways change the world of wine? Miles waxes effusive on Pinot Noir and thoroughly disparages popular Merlot wines. The tasting scenes demonstrate all that is snobby about wine, while making the entire topic appealing and accessible to the casual wine sipping masses. The snappy wit of the film made film-goers think and talk about wine in the way a serious dialogue on the topic could not hope to touch. The character of Miles had nothing but strong opinions about wine and shared them with anyone who would listen; when Jack tried to get him to allow their dates to choose the wine, Miles uttered his now famous line: "No, if anyone orders Merlot, I'm leaving." Of course, Jack is willing to drink anything with alcohol; after Miles describes one vintage as "rancid tar and turpentine," Jack responds: "Tastes pretty good to me." Add empathetic characters and stunning vineyard scenery, and the movie is a winner. 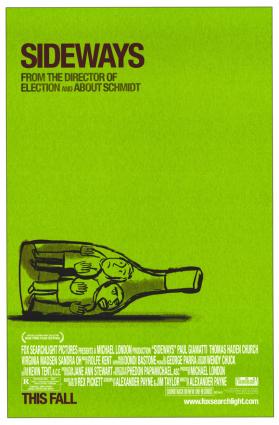 Miles' love of Pinots sparked wine drinkers not only to talk about the movie and the wine in it, but to drink more Pinot. Industry estimates and anecdotes from wine dealers all attribute increased sales of Pinot Noirs late in 2004 and early in 2005 to the film. In fact, according to NPR, about a dozen years after the movie's release, Pinot Noir had become one of California's flagship wine. As of 2017, Pinot Noir production in California had increased about 170%, a phenomena dubbed "The Sideways Effect." The movie may also have temporarily suppressed sales of Merlot. Merlot sales dropped around 2% between the movie's release in 2004 and 2008, while Pinot sales during that period rose 16%. Are Miles' wine comments all accurate? Not always, according to aficionados, but the added attention on the wine industry is welcome nonetheless, especially since it coincided with a glut of reds in the U.S.

Another effect the movie had on the wine industry is the creation of the Sideways Wine Trail. If you're in Santa Barbara, and you'd like to visit wineries featured in the movie, you can follow the trail, which visits a number of wineries following a wine map that takes you to some of the following places.

Miles and Jack first stop at the Sanford Winery where they taste the now somewhat clichéd, yet delicious, Pinot Noir. Sanford is known for both their Pinots and their Chardonnays.

Jack and Miles have dinner at the Hitching Post, where they meet Maya.

Foxen is the next stop on the Sideways wine tour; Miles samples the Chardonnay and gives it a passing grade.

Miles slams the estate Syrah and the Cabernet Franc at Kalyra, but Jack hits it off with Stephanie and the guys make dinner plans with her and Maya when they discover the two women are friends.

The final winery in the movie is the loosely disguised Fess Parker winery where Miles loses his temper and drinks the wine from the spit bucket.

More Wine Featured in the Movie

The characters in Sideways don't limit their wine drinking to their winery visits. Some of the other wines that the characters enjoy or discuss in the film include:

Sideways was based on a book by Rex Pickett. Director Alexander Payne co-wrote the screenplay with Jim Taylor. Payne was responsible for putting together the list of wines actually used in the film, although the actors used a non-alcoholic substitute for many of the scenes. Domestic gross for the film exceeded $71 million, a phenomenal return on the $16 million production budget. You can find the movie on Blu-Ray and iTunes with links found at the Sideways website.

Since the release of Sideways, a number of documentary and feature films have been made that include wine as a main theme. This includes the female buddy movie, 2019 film Wine Country and the French drama, Back to Burgundy among others. While Sideways is the original wine movie, it's proven to be an intriguing subject for other films as well.

1
Comments
© 2006-2020 LoveToKnow, Corp., except where otherwise noted. All Rights Reserved.
The Movie Sideways' Effect on the Wine Industry