Many people have the misconception that if a wine bottle has a screw cap, it is somehow of inferior quality. In fact, many winemakers producing fine wines believe the screw top to be superior to the cork in sealing wine bottles for a number of reason. Most Australian wines, including very expensive and high quality wines, are now sealed with screw caps and the trend continues to grow around the world. With more converts than ever to this ideology, the screw top wine bottle is on the rise.

Screw Tops as Alternatives to Cork

Cork has been the principal closure for wine bottles since the 17th century, but screw top wine bottles are becoming popular in the 21st century. Cork itself is processed from the bark of the cork tree, which is a type of oak and is found in the western Mediterranean area in Portugal, Spain and North Africa. The majority of the world's bottle-stopping cork comes from Portugal, where it is a primary export and a key component of the nation's economy.

Why are wine bottle closures important? Because they are needed to seal the bottle and protect the wine from damaging oxygen. Cork has served its purpose admirably for several centuries. But corks are imperfect and fallible. They can crumble, break, or leak, and they can create an unpleasant issue with the wine, corked wine, which can taint a wine and impart off flavors and aromas. Because of this, the wine industry has begun seeking alternative bottle closures to improve quality and prevent costly financial losses due to bad corks. One alternative that has made strong inroads to usurping the organic cork is screw top wine bottles.

Corked Wine Is a Problem

By some estimates, about one bottle in a case of twelve suffers from cork taint. Corked wine occurs when trichloroanisole (TCA), a compound that forms when a chlorine bleaching agent used in the manufacture of corks, reacts with mold already present in the cork. TCA can also occur in the pipes, drains, and casks at a winery, but when a wine is corked, then the usual suspect is the cork. The frequency of TCA's presence in corks in recent years can most likely be attributed to the increased volume of wine sold and the decline in cork quality to meet demand. This increased frequency has caused some winemakers to look for other stopper solutions.

Perhaps one of the best alternatives to is the screw top wine bottle. Screw caps are not new, they have been around for several decades. However, screw caps have had an uphill battle to make significant headway against cork. But as both winemakers and consumers get fed up with cork and its increasing problems, momentum swings towards screw top wine bottles. These screw cap closures have an aluminum alloy casing as an outer layer with an expanded polyethylene liner. As the cap is compressed, the polyethylene liner compresses and creates an airtight seal, which is exactly what the cork does.

If a screw cap is so superior to cork, why isn't there a rush of winemakers to switch? Many industry experts believe the main thing keeping corks the norm and screw caps in the shadows is tradition. The wine world is rife with it, and many of the rituals of wine tasting and drinking involve the satisfying pop of the cork. Somehow, unscrewing your wine just doesn't have the same flair. Traditional bunch that they are, many winemakers -- particularly Old World winemakers -- have trouble leaving behind the tradition of the wine cork. 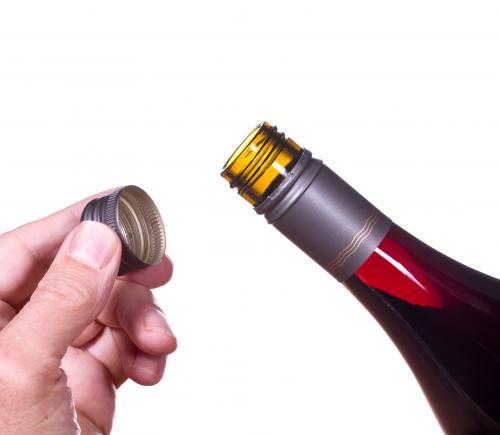 Seemingly, screw caps present a viable alternative to cork with many advantages. However, traditional perception molds are tough to break. Consumers will be the driving force for major change in the wine industry. Too many people equate wines with screw caps as being jug wine-inferior, lower quality, and not for aging. They may be fine for $10 bottle of Chardonnay but not for that cult wine from Napa Valley.