Since the early 1990s, the news media has been full of reports about the health benefits of red wine. However, it can be difficult for wine drinkers to sort out the facts from the hype. There have been numerous scientific studies into this issue, and the results can help you understand whether moderate consumption of red wine really might help improve your health.

According to the Mayo Clinic, it's likely that red wine has more health benefits than any other type of alcohol. This is due to a number of substances in the wine. It includes polyphenol antioxidants, naturally occurring chemicals that can help combat oxidative stress in the body and result in a number of important health benefits. Two of these antioxidants, resveratrol and flavanoids, may have a notable effect on human health. Resveratrol, in particular, comes from the skins of grapes, which are left in during the fermentation of red wine and removed for white wine.

Red wine may improve your health in the following ways.

One of red wine's most famous health benefits is its effect on heart health. A study published in the journal Nature found that red wine consumption is indeed linked to lower risk of inflammation and coronary artery disease, as well as a reduced chance of dying from a heart attack. It also found that red wine produced according to traditional methods that maximize the amount of resveratrol and flavanoids in the wine is even better than other varieties at improving heart health.

The American Heart Association conducted a review of the literature on this topic and found that moderate consumption of red wine, defined as one to two glasses per day, could reduce a person's risk of a heart attack by about 20%. Red wine decreases LDL (the bad cholesterol) and increases HDL (the good cholesterol). 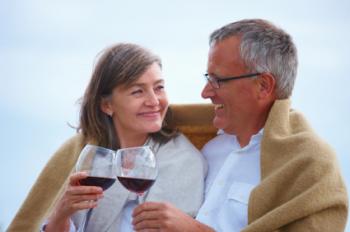 You may have heard the claim that something in red wine slows aging and can increase lifespan. There have been a number of studies on this topic in recent years.

According to a review of the literature published in Heart Failure Reviews, several studies have proven that the resveratrol in particular can actually turn on the expression of certain genes linked to longevity. It can also reduce some of the damage caused by the natural aging process, particularly as it concerns the heart. However, in studies with mice, resveratrol didn't prolong the mice's lives. Although longer lifespan is associated with red wine consumption in certain regions of France, more research is needed to determine the extent to which the human lifespan is affected.

Red wine may also help slow the progress of Alzheimer's Disease; however, research into this area is still being conducted. According to a study published in the journal Life Sciences, consuming red wine made from black-skinned grapes reduces oxidative damage and possibly has neurological implications. The researchers felt that with further study, substances in red wine may be proven to help slow the progression and prevent the neurological damage associated with Alzheimer's.

Part of red wine's heart health benefit comes from it's ability to reduce inflammation in the body, but there are other implications for inflammation reduction. A study published in the American Journal of Biomedical Sciences found that red wine consumption also helped protect patients against the inflammatory response associated with various serious infections. This could potentially reduce long term damage from an elevated immune response in the body.

The resveratrol in red wine has also been shown to help in the prevention and treatment of certain cancers, according to an article published in Critical Reviews in Food Science and Nutrition. There are several important aspects of this benefit:

Although there's still much to discover about the effect of red wine consumption on already-diagnosed diabetes, a review of the literature in the Journal of Medical Biochemistry found that the alcohol in red wine could actually prevent diabetes. However, this effect may not be limited to red wine. The article notes that this preventative benefit is most likely linked to moderate alcohol consumption in any form.

The same review of the literature in the Journal of Medical Biochemistry demonstrated that substances in red wine reduced the risk of blood clots. Blood clots are one of the major causes of strokes.

Red wine may also help with preventing tooth decay. According to an article in the journal Current Opinion in Biotechnology, several foods and beverages have been shown to reduce the incidence of caries, or cavities, in people that consume them. One of those foods was red wine.

How Much Red Wine Should You Drink? 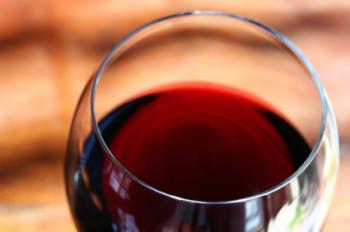 A serving is four to five ounces.

In all studies, scientists found that drinking too much red wine could negate many of the health benefits. However, it can be difficult for wine drinkers to know exactly how much to consume to see the benefits at all. According to Yale-New Haven Hospital (YNHH), it depends on your gender:

YNHH also notes that people who don't currently drink alcohol shouldn't feel that they must start drinking to be healthy. It's also important to check with your doctor to rule out any health problems that could be exacerbated by consuming wine.

There's little doubt that red wine has many health benefits, but those benefits only apply if you drink wine in moderation. Understanding the potential health benefits and the amount of red wine that can help is essential for making smart decisions about whether regular wine consumption is something you want to include in your healthy diet.