Located in Sonoma County, Red Car has been producing wines for two decades. While the winery started by producing Syrah in Los Angeles, it moved north to Sonoma County and now produces cool-climate California wines such as Pinot Noir, Roussanne, Chardonnay, and Syrah. The winery, which was named for the Los Angeles trolley line, seeks to grow grapes sustainably in biodiverse environments along the Sonoma Coast.

Red Car's wines are generally well-received by critics, often garnering ratings in the lower to mid 90-point range. In the past, the winery has offered an array of different red wines, rosé, and white wines including wine blends. Current releases of Red Car wines include the following varietals.

Vivio Roussanne is a dry white wine produced with Roussanne grapes from the Bennett Valley region. It is aged in 100% neutral French oak. Wine Enthusiast liked the 2015 vintage, rating it 90 points. Expect apple and floral notes in a brightly acidic wine.

Currently, Red Car makes one rosé wine from its Pinot Noir grapes. It is made in a vin gris style in which the red wine grapes are pressed, removed from the skin, and fermented in stainless steel tanks. The Red Car rosé is then aged for three months in neutral oak barrels. Wine Enthusiast liked the 2018 vintage of this wine, awarding it 91 points. It's a zippy rosé with tropical notes.

Red Car has had quite a bit of success with the juicy and spicy Syrah grape, making delicious varietal wines.

2014 was the first year Red Car offered this Cab, a single-vineyard wine from the Sonoma Coast. It's aged 20 months in 33% new French oak. Expect notes of bay laurel and licorice in a classic Cabernet Sauvignon that pays homage to the tradition of coastal winemaking in the Médoc.

Red Car's tasting room is located in Sebastapol in the heart of Sonoma County at 8400 Graton Road. The tasting room does welcome walk-ins but recommends reservations for all of its tasting experiences. Tasting prices start at $20 for a single-vineyard flight. The winery also offers a seated Pinot Noir tasting for $35 (reservations required) or a seated tasting and charcuterie experience for $45 (reservations required and limited to 10 participants). Reserve on the Red Car tasting page or by calling 707. 829. 8500. 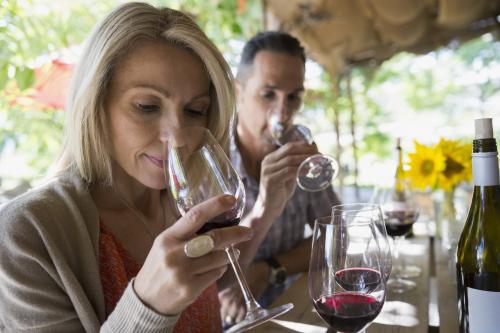 Where to Buy Red Car Wine

You can buy Red Car Wine directly from the winery's website or by visiting the winery. Many wine shops across the country may also offer the wines.

You can also join Red Car's wine club. The winemaker offers multiple levels of membership including:

Red Car wines are fine wines coming from Sonoma County, primarily along the coast. The winemakers take care to produce high-quality wines that are sure to please the most discerning of palates.