New Zealand's wine industry has only been producing wine for export since the 1980s, but wines from the small country quickly gained popularity and acceptance on the world stage. Within about five years, wine exports from New Zealand reached around $20 million, and currently the wine industry exports nearly $2 billion in wines the country has gained worldwide recognition for, such as Sauvignon Blanc and Pinot Noir.

While New Zealand is relatively new to the world stage, winemakers have been growing grapes and bottling wines since the 1800s. Most of the early wines bottled in the country were table wines and Sherry or Port-style wines made for local or personal consumption from grapes grown in family vineyards, and the varieties were light, semi-sweet white wines. Prohibition, the Temperance Movement, the Great Depression, and lack of access to wines from the rest of the world because of New Zealand's remote location kept wine from flourishing in New Zealand through early parts of the 20th Century. It was in the mid-1980s when growers began widespread planting European grape varietals that New Zealand entered the world wine economy and began producing wines the rest of the world wanted.

New Zealand's two islands have a diverse climate allowing for both warm and cooler weather grapes to flourish. The climate ranges from subtropical in the north to the southernmost wine-growing region in the world in Central Otago. Cooler temperatures from the country's extensive coastlines provide a long ripening period, which allows the grapes to develop in flavor and character to produce intense, powerful, dynamic wines that express the character of regions in which they are grown. New Zealand has 11 major wine regions, each with its own unique climate, microclimates, and soils.

Marlborough is New Zealand's best known and most successful wine region. Located on the north tip of South Island, this coastal region receives plenty of warming sunshine (it's the country's sunniest region), and it is sheltered from cooler southern temperatures by high country to the west and south. Coastal breezes cool the grapes and allow for a long ripening season. It doesn't rain a lot here, and the soils are well-drained. Likewise, foehn winds cause abrupt warming and drying, so the grapes become deeply concentrated producing intensely aromatic and flavorful wines.

Located on the east coast of the North Island, Hawke's Bay is the second largest wine-producing region in New Zealand. With coastline and river valleys, the wines here express differently than in the Marlborough region. It has warm, dry summers and long falls, but the maritime climate also keeps temperatures from soaring too high. 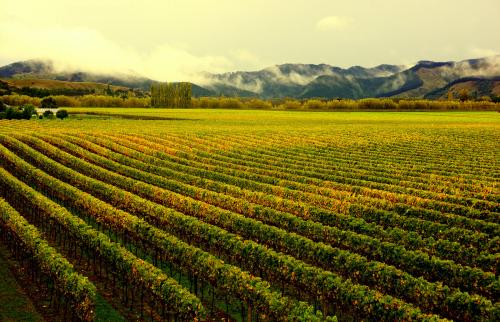 Central Otago is the southernmost wine-growing region in the world. Located on the south part of the South Island, Central Otago has the highest wine growing elevation of all of New Zealand's wine regions. As a result, the region has short, hot summers with dry autumns and low humidity. 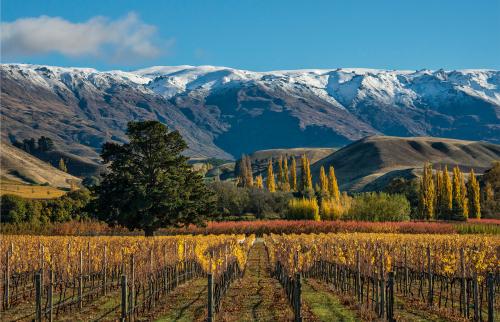 Located on the central east coast of the South Island near the city of Christchurch, Canterbury/North Canterbury makes about 3 percent of the wines produced in New Zealand. 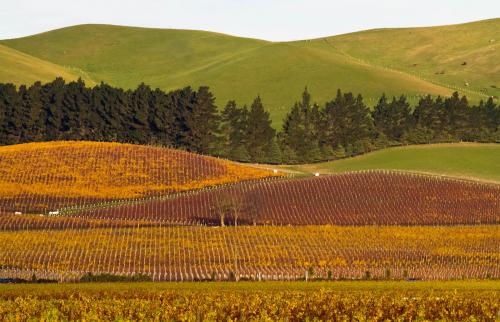 Located north of Hawke's Bay on the east coast of the North Island, Gisborne is a warm and sunny region with coastal cooling. 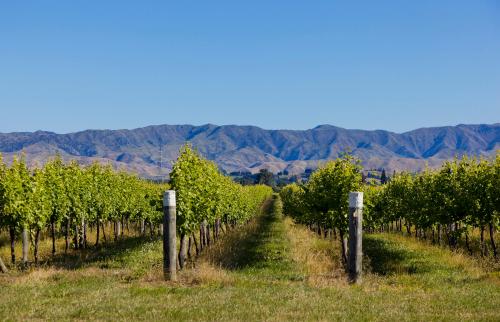 The remaining wine regions each produce less than 2 percent of the country's wines. 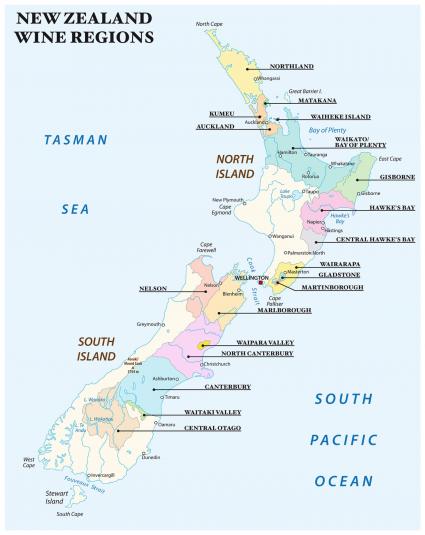 9 Wines to Try From New Zealand

Of course you'll need to try a Sauvignon Blanc from New Zealand because this is the wine that truly shows you how far New Zealand's wine industry has come in such a short time. However, along with great Sauvignon Blanc wines from Marlborogh, you'll find a number of fantastic wines, often at great values.

To truly understand New Zealand's Sauvignon Blanc, you need to taste a Cloudy Bay Sauvignon Blanc, the country's first highly acclaimed wine produced in the Marlborough region. The wines are consistently highly rated by wine experts, and the 2016 vintage is highly rated.

Felton Road, located in Central Otago, produces Pinot Noir wines of distinction. The 2017 Bannockburn Pinot Noir will only set you back about 50 bucks, but it received monster ratings from Wine Spectator (96 points) and James Suckling (94 points). This is the Pinot to try from New Zealand; it's a tremendous value for the price.

This red Cabernet Sauvignon-Merlot blend from Te Mata has been called "a New Zealand national treasure," and Robert Parker gave the 2017 vintage 93 points and the 2016 vintage 94 points. At around $75 per bottle, it's a well-priced and well-received bottle of wine from Hawke's Bay.

From the North Canterbury region, Mount Beautiful produces a number of wines including this truly beautiful Chardonnay that suits the winery's name to a T. Wine Enthusiast named the 2017 vintage an editor's choice, and Wine and Spirits Magazine awarded 91 points to the 2015 vintage. At under $25 per bottle, if you can find this Chardonnay, it's a fantastic wine for the price.

Located in the Hawke's Bay region, Billancia produces a single-vineyard estate Syrah called La Collina. James Suckling placed the 2016 vintage of this wine in the number two position on his Top 100 Wines of New Zealand list, and it costs around $80 per bottle. It may be difficult to find, but Wally's Wine World has a limited amount and some may also be available soon on secondary markets. If you can find it, it's worth it to purchase.

While this wine is on the pricer side (about $100 per bottle), Craggy Range Le Sol is a beautiful representation of Syrah from Hawke's Bay. Various vintages regularly score 90 points or above by wine raters. The 2016 vintage took silver in the Decanter World Wine Awards. It may be tough to find bottles, but they are available on secondary markets. Check wine-searcher to see what's available worldwide. Top recent vintages include 2013, 2014, and 2015.

It's difficult but not impossible to find a sparkling wine from New Zealand stateside. The Sophora Sparkling Cuvée is a non-vintage Pinot Noir-Chardonnay blend made in the traditional méthode champenoise. It's only $15 a bottle, and Wine Enthusiast lists it as a great example of a sparkler from New Zealand.

If Riesling's your thing, then there are good examples coming from some of New Zealand's cooler regions. The Dry River Craighall Riesling tops Vivino's list of top Rieslings from NZ, and you'll find various vintages available in US shops. The grapes come from the Martinborough subregion of Wairarapa.

With a relatively young international wine industry, New Zealand is growing in acres planted and worldwide reputation. The up-and-coming wines from New Zealand have powered their way onto the world stage, standing shoulder-to-shoulder with wine regions that have long established histories of creating world-class wines.