The grapes used in Muscadine come from the subgenus of Vitis called Muscadinia, also known as Vitis rotundifolia. The grapes originally grew wild but have been cultivated in the Southeastern US since the 17th Century, and they grow well in the warm, humid environment found throughout the South. Unlike other types of wine grapes, Muscadine grapes ripen separately as opposed to in clusters, so they are harvested from August to late October. There are both light-skinned (bronze) and dark-skinned (black) varieties of the grape. The first named variety was a bronze grape called Scuppernong. Varieties used for wine or juice include:

Some varieties of Muscadine aren't used for juices and wines, but rather for eating and making jams, jellies, and preserves. 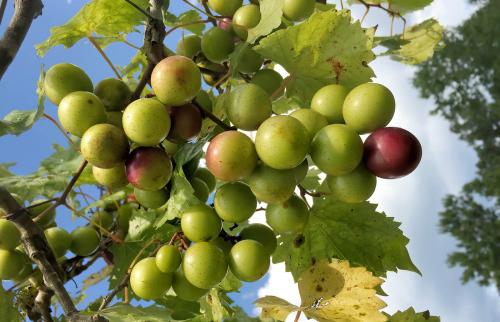 Muscadine and Muscat Are Not the Same

Many people confuse Muscadine wines with Muscat or Moscato wines, two wines made from lightly sweet, aromatic, white European grape varieties. Muscadine wines are unique and not related to these wines, despite the similarity in names.

Due to the thickness of grape skins, Muscadine grapes often have difficulty reaching peak ripeness. Because of this, winemakers frequently use chaptalization in the winemaking process to increase the alcohol content of the finished wines. The thickness of the skin does make Muscadine wines relatively high in polyphenols and resveratrol, which are believed to provide wine with its unique health benefits.

Because sugar is added during chaptalization to increase the alcohol content of the wine, Muscadine wines tend to be sweeter (the minimum residual sugar is about 10 grams per liter and often higher), although it is possible to make a dry wine from Muscadine grapes. The wines have moderately high acidity along with low alcohol content (about 10 percent alcohol by volume).

How to Drink and Store Muscadine

Think of Muscadine as being like a Beaujolais nouveau; drink it chilled and in its youth. Because the compounds in Muscadine oxidize easily, it's not a wine made for aging.

You can find commercially made Muscadine wines in some shops or online. Consider the following winemakers.

The San Sebastian Winery in St. Augustine, Florida makes traditional wines and Muscadine wines. The Vintner's Red ($12), Vintner's White ($12), Rosa ($9), and St. Augustine Lighthouse ($18) are all made from Muscadine grapes.

Located in North and South Carolina, the Duplin Winery specializes in sweet Muscadine wines. Wine varieties include reds, whites, rosés, sangria blends, American ports, sparkling wine, alcohol-free wine, and alcohol-free cider. The wines are inexpensive, most costing under $20 per bottle and available online, so it's a great way to try the many expressions of the Muscadine grape.

Florida's Lakeridge Winery makes both traditional and Muscadine wines. The Southern Red, Southern White, Sunblush, and Chablis are all semi-dry to sweet Muscadine wines that cost under $12. Purchase the wines on their website.

Stonehaus Winery in Tennessee makes some traditional wines, but they also make some fun and unusual wines as well, including Muscadine. The Muscadine and Red Muscadine both cost less than $15 per bottle and you can buy them online.

Muscadine and Scuppernong Are Uniquely Southern

If you'd like to taste how the American South does wine, then Muscadine/Scuppernong is a great place to start. A different variety of grapes creates uniquely flavored wines steeped in Southern tradition that provide you with a fun and interesting take on wine.