Madeira is a fortified wine that comes from the Portuguese Madeira Island archipelago which sit off the coast of Africa. It is a wine that has been around for centuries, and for the most part it retains its original styles and winemaking processes. You'll find that Madeira wines are quite different from the other wines you've tried in the past, but one taste will tell you exactly what makes Maderia such a popular and enduring wine.

What Is Madeira Wine?

Maderia is a fortified and heated wine made from red or white grapes that are grown on the Maderia islands. Fortified wines have a neutral spirit added, usually brandy, which halts fermentation and increases the alcohol content of the finished wine. Madeira wine comes in a range of styles from dry to sweet.

Maderia tastes different from other wines. Because of the process used to make it, it often has baked and caramelized flavors such as caramel, roasted nuts, and orange rind. It will vary in style from dry to sweet depending on the type of Maderia you are drinking, but the flavors tend towards warm and toasty.

During the 1400s, merchant ships visited the West Indies and often left carrying barrels of wine aboard the ship. Because of the intense heat of the tropics, these wines frequently spoiled during the voyage as wine is volatile and sensitive to vibration, oxygen, and heat. However, winemakers discovered that adding distilled spirits to the wine helped to preserve it during the long voyages. With fortification, instead of the heat destroying the wine, it enhanced the flavors. Because of this, Maderia became popular throughout Europe and in colonial America.

How Madeira Wine Is Made

The process of making Maderia starts similarly to other wines with grape harvest, crush, and fermentation. What separates Maderia from other types of wine or fortified wines such as Port or Sherry is how it is aged. The aging process is meant to mimic the conditions that originally created Madeira wines, which involved transporting barrels of wine through tropical climates aboard sailing vessels. During this process, the wine is heated to create Maderia's unique flavor profiles. Once the heating process is completed, the Maderia is aged in wooden casks.

In this process, the wine is aged in concrete or steel tanks with warmed hot water piped around the tank. The wine is heated to between 110°F and 130°F for at least 90 days. Maderia created this way tends to be more affordable than cantiero Madeiras. Alternatively, the tanks of wine are heated in what is essentially a steam room for a period of about six months to a year. The wines must be aged in wood casks after estufagem, and they can be bottled and released two years after the grape harvest.

With this method, the sun is used to heat the Maderia so it warms naturally. This process may take years or even decades as the Maderia sits in wooden casks in warm rooms or out in the sunlight where it is naturally heated and cooled by the rhythms of daylight. The highest quality and most expensive Maderia wines are made using this method. The minimum bottling age for these wines is three years. 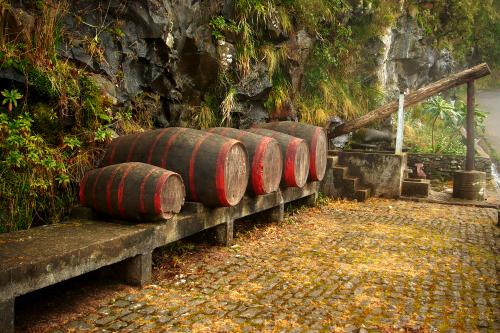 You can buy Maderia in vintage and non-vintage varieties, and you'll find single grape or blends. When you buy a bottle of Maderia, it will be labeled with a quality designation and likely a grape variety.

Rainwater Maderia is made primarily from Tinta Negra grapes. The wine must be at least three years old, and the style is dry and light-bodied. This is your best option for a cooking Madeira, although it also drinks well.

You might also find these labeled as "choice", "select", or "finest." These are blended Madeiras that are aged between three and five years. The main grape here is Tinta Negra, and the wines are made via estufagem method and aged in tanks instead of wooden casks.

This indicates any Madeira that is between five and ten years old.

These are wines that are 10 to 15 years old. They tend to be single variety wines made heated using the canteiro method.

These are wines with an age of 15 to 20 years and created using the canteiro method.

In order for a Madeira to be listed as a vintage wine, it must contain at least 85 percent grapes harvested in the listed vintage.

Colheita Madeira may be a single grape variety or a blend, and it must be aged for at least five years before bottling.

These Madeira wines are aged via the canteiro method and can be a single grape variety or a blend. Aging occurs in wooden casks for at least 20 years and must be bottle aged for an additional two before release.

Maderia may also be classified from dry to sweet depending on the residual sugar content. These might be designated on the label as follows (listed from driest to sweetest):

Tinta Negra Mole (Tinta Negra) is a black-skinned grape native to Portugal. It's a believed to be a hybrid of Pinot Noir and Grenache grapes. It accounts for about 85 percent of grapes used in the production of Madeira and is used primarily in production of Rainwater Madeira.

Malmsy, which is the name you're more likely to find on a bottle of Madeira, is also known as Malvasia. It's a bronze-skinned grape that produces the sweetest type of Maderia.

Bual is a bronze-skinned grape that is lightly sweet, although the wines made from it aren't nearly as sweet as those made with Malmsy. 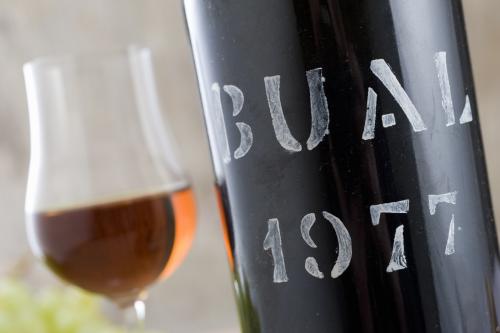 Verdelho is a Portuguese bronze-skinned grape. It used to be the primary grape used in making Madeira, but the phylloxera epidemic of the 19th century wiped out much of the stock, so it is less commonly planted now but still used in making the fortified wine. The wines made from Verdelho tend to be semi-sweet or off-dry.

Sercial grapes make the driest form of Madeira. The variety is a bronze-skinned grape. Maderia wines labeled as Sercial are dry and acidic and made up of at least 85% of this grape.

Terrantez is increasingly rare in Maderia production, although you will still find it in some Maderia wines. It is a bronze-skinned variety that is nearly extinct on Maderia but still grown in small amounts.

Bastardo is a black-skinned grape that may be used in some Maderia wines, although its use is rare. It is widely used in the making of Port wine, however.

A label on a bottle of Madeira is likely to contain the following information:

Store Madeira wine upright in a dark, cool location away from vibration. While it's unlikely the Maderia will continue to improve with age in storage, you can store it for several years in the right conditions. After opening, you can reseal the bottle and store it in the fridge for three to six months. Serve dry or off-dry Maderia as an apéritif at about 55°F. Store sweeter Maderia at about 60°F. Serve in a Port glass or a dessert wine glass as a dessert.

In the United States, you will find some bulk cooking wines labeled as Madeira. These are not a traditional Maderia, nor are they made for drinking because they tend to have salt and maybe pepper added. In general, it's best to cook with a wine you would also drink, so wines labeled as cooking wine are never a great addition to food. Instead, your best bet for a cooking with Madeira is one that is labeled as a Rainwater Madeira. These wines will impart nutty and caramelized flavors to food. Dry or off-dry Madeira is excellent in pan sauces used for chicken, beef, or other animal proteins. It's also delicious with mushrooms. Try adding it to mushroom risotto.

Difference Between Port and Madeira

There are similarities between two of Portugal's fortified wines, Port and Maderia. However, the two are different products. They vary in how they are made; Madeira is heated during production, which imparts interesting caramel and baked flavor nuances. Port is not heated during the aging process. While tawny Port can also have nutty flavors, Maderia's flavors are warmer with more baked flavors than Port. You can use either in cooking, although the dry styles of Maderia tend to lend themselves better to savory dishes than Ports do. The best way to understand the differences is to try them side-by-side and see which you like.

Some Madeiras to Try

You'll find Madeira in speciality wine shops and in some liquor or grocery stores as well. Look for Madeira made in Portugal, which is the real thing. Wines made outside of Portugal are Madeira-style wines but not true Madeira. Consider trying a few of the following wines.

The Broadbent Malmsy 10-Year is a sweet Madeira aged in oak casks for at least 10 years. It's a gold-colored Madeira that is rich and sweet, and it's affordable at about $50 per bottle.

This is a semi-sweet vintage Madeira with notes of roasted walnuts and gingery spices. It costs about $50 per bottle and is a nice, affordable example of a vintage Madeira.

This is a non-vintage Madeira that is relatively dry with nutty flavors and a nice zippy hint of acidity. It costs around $50.

This is a sweeter Madeira made from the Verdelho grape. For around $60, you'll taste a nutty Maderia with hints of orange peel, almonds, and spice.

This is a good Maderia for cooking, and it also makes a nice apéritif. The Leacock's Rainwater Madeira is medium-dry and made from Tinta Negra grapes. You can find it for under $20 per bottle, and it's fruity and nutty with flavors of caramel and fruit.

The Blandy's 5-Year Old Bual Madeira is medium-dry with surprising notes of apple and guava along with more traditional caramelized and nutty flavors. It costs around $24 per bottle.

Madeira Is Unlike Any Other Wine

Because of the unique processes used to make Madeira, you won't find any other wine like it. With caramelized and baked flavors and plenty of punch, it's a delicious wine to try for yourself or share with guests.