Italian Merlot wine is an excellent choice for those who want an easy-drinking wine that pairs well with many dishes. Merlot has been growing in popularity alongside Italy's more well-known wines and grapes such as Chianti and Barolo. Today, Merlot is the fifth most widely planted grape in Italy.

Italian vintners have been cultivating the Merlot grape since the late 19th century. This grape is particularly refined in the hillside region near Trento City, as well as in the Vallagarina Valley. In these areas, a cultivation system called Pergola Trentina and Guyot provide low yields, which results in concentrated grapes that translate into complex wines with rich flavors.

Following the phylloxera epidemic in Italy, which wiped out most of the Old-World vines, the Italians imported several phylloxera-resistant varieties from the United States. One of these was the Merlot grape.

During the beginning of the 20th century, the popularity of Merlot spread throughout the regions of Veneto, Friuli, Trentino, and Alto Adige, all in the Northeastern part of Italy. By the 1990s there were more than 93,000 acres of Merlot wine in production in Italy. It is a variety that produces high yields and therefore usually makes it into some of the lesser priced wines. However, in the hands of the right vintner, Italian Merlot wines can be wonderful and just as complex as their more expensive and famous counterparts, such as Chianti, Brunello, or Barolo. Today there is a small renaissance among Italian winemakers who are embracing this grape and finally giving it its due moment in the sun.

The new Merlots are from non-traditional regions that typically didn't grow the grape. Today, this variety is more widely grown in central Italy, where vintners are creating some very balanced and more well respected wines. Many Italian wines contain Merlot, both in blends and as a varietal. For example, the popular Italian blends with Bordeaux grapes and Sangiovese called Super Tuscans often contain Merlot, which has soft flavors and tannins that can temper more powerful grapes and lend softness and depth to the finished wine. 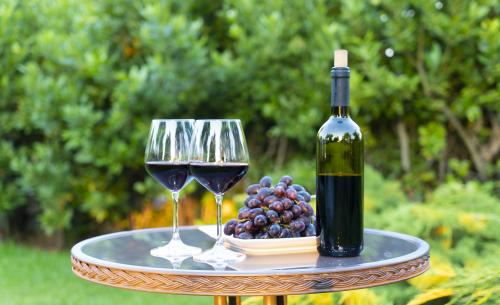 Recent vintages of this Tuscan Merlot have been hailed by Wine Spectatoras being exemplary of just how good Italian Merlot can be. For example, the 2015 vintage received a 95-point rating for its dense flavors and powerful tannins that will allow the wine to age through 2040. The 2014 vintage was just one point lower in its rating for a lush, soft Merlot that won't age as long but will drink well sooner. You can lay it down through about 2028. Recent Merlots from this producer release for between $150 and $200 per bottle.

This is a Cabernet Sauvignon-Merlot blend from Tuscany that has an affordable release price point of around $50. However, it's a highly well-received Merlot, particularly recent vintages. Wine Spectator awarded the 2016 vintage 93 points for a Merlot that is drinking well now through 2030.

This Tuscan Merlot isn't for the faint of heart price-wise (you'll spend upwards of $550 per bottle), but it consistently receives monster ratings from critics. In fact, across vintages and critics, it receives an aggregate critics' score of a whopping 95 points, putting this soundly into the realm of a highly collectible wine. Most bottles go quickly, but there are some available on secondary markets for collectors.

This is a 100% Merlot from Campania in Southern Italy. With a release price of around $100, it's a mid-priced to expensive yet consistent and highly acclaimed Italian Merlot. Across vintages and critics, it receives an aggregate rating of 93 points, which shows consistency in the winemaking and grape growing process. Pricing varies wildly on secondary markets for this wine depending on available supply and demand, but bottles on secondary markets can cost as much as $200. Wine Enthusiast calls the wine "soft and decadent."

This is an excellent and affordable Italian Merlot that traditionally costs around $30 per bottle. Wine Spectator rated the 2015 vintage 92 points and suggested it will be fabulous with some bottle age. The wine can age for 10 to 15 years.

If you're looking for a highly affordable Italian Merlot that's still critically-acclaimed, then try the Tellus Merlot from Lazio, Italy. It costs around $16 per bottle, but critic James Suckling likes it. He's awarded recent vintages with 91 point ratings.

This Merlot is also produced in Lazio. It's a good mid-priced Merlot for about $50 per bottle. Critics' scores for this Merlot tend to fall in the lower 90-point range, from around 90 to 92 points.

If you're looking for an affordable, drink-it-now Italian Merlot in the $10 price range (this one is just over that price), then you may enjoy the Montresor Rustego Rosso. It's a Merlot-based blend with earthy plum flavors. Consumer reviews on Vivino give this wine 3.7 out of 5 stars, and those on Total Wine & More give it 5 out of 5 stars. It's a great value for a decent wine.

One of the most important factors in producing a quality Italian Merlot wine is to ensure that there is a harmonious relationship between the grape and its terroir. The grape needs great attention to the soil, as well as the concentration of berries on the vine. The fewer grapes, the more concentrated the wine will be. Thus, wine makers must ensure that they are pruning their vines with great care. 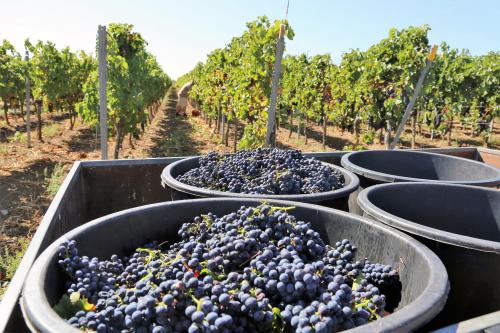 Merlot Around the World

When made well, Merlot wine is soft and velvety with an overnote of plum and very few tannins. However, there are some that are a bit more robust with high tannins, similar to Cabernet Sauvignon.

Italian Merlot is an excellent food wine that pairs well with grilled meats, salmon, and mushroom dishes. The lighter versions can even pair with rich shellfish like prawns, scallops, and lobster. Italian Merlots go best with Italian foods such as tomato-based pasta, risotto, lasagna, and chicken braised in red wine.

There are so many bold, beautiful Italian wines that get big press, but Merlot holds its own. It's a softer red wine grape that works well both in Italian red wine blends and as a varietal. Regardless of your budget, there's certain to be an Italian Merlot priced right for you, so give this hidden gem of the Italian wine scene a try and see just how good Merlot can be.