It used to be that most Americans' experience with Chianti (kee-ahn-tee) wine was a rounded bottle wrapped in a straw basket (called a fiasco) and consumed at an Italian restaurant, but the world of Chinati is far more vast and complex than that. Chianti is the name of the wine, but it's also the name of the region in Tuscany, Italy where the grapes are grown and the wines are produced, and modern Chianti winemakers are producing world-class Old World wines.

In order for wine to be called Chianti, the wine must be made from 80 percent Sangiovese grapes and produced in the Chianti region. Chianti as a region is in the center of Tuscany. It runs throughout the Tuscan landscape, starting from Florence at the northern boundary and spreading south to the medieval town Siena. Think of the region as a Chianti pie sliced into eight Chianti zones and within the DOCG (Denominazione di Origine Controllata e Garantita) designated appellation; Classico is the most famous and the model for the eponymous wine. That being said, overall more Chianti is produced in the other seven zones of Chianti Rufina, Colli Fiorentini, Colli Aretini, Colli Senesi, Colline Pisante, Chianti Montespertoli, and Chianti Montalbano. Wine from these non-Classico regions can be labeled simply as Chianti or with their subzone name.

Government regulations control how Chianti is labeled. Chianti is a Denominazione di Origine Controllata e Garantita (DOCG) which is an Italian wine designation, the highest designation for wine regions in Italy. All Chianti is DOCG, but you'll find other information on the label to indicate quality and place.

Wines labeled Chianti DOCG may be sourced from any of the sub-regions in Chianti. These are usually lighter Chiantis without a ton of aging potential, but they make good introductions to the wine or serve as a nice, affordable table wine.

Wines with this on the label tend to be a step up in quality. The grapes come from the Chianti Classico region, and the wines tend to be fuller and richer with slightly more aging potential than a Chianti DOCG.

Like the Chianti Classico DOCG, the grapes for this wine grow in the Chianti Classico region, but these wines are barrel-aged for two years plus an additional three months in the bottle. These are higher quality wines with softer tannins and flavors from the wood have been imparted to the wine.

This label is reserved for top quality Chianti Classico wines. They are made exclusively with estate fruit, and the wine is aged for 30 months in oak barrels. In some cases, the wines are single-vineyard, as well. These are the most expensive and best quality of all the Chianti wines. 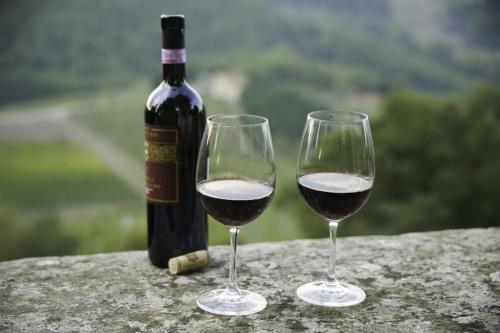 The primary grape in Chianti is Sangiovese, the same grape you'll find in Brunello wines. It is Italy's most widely planted grape and the most widely consumed Italian grape around the world. Chianti is generally made of 80 to 100 percent Sangiovese, although up to 20 percent of the wine may be other grapes including Canaiolo, Cabernet Sauvignon, Merlot, or Syrah, which can soften the medium-body and big tannins found in Sangiovese.

The Sangiovese grape produces light to medium-bodied dry red wines with high tannins and acidity. The ideal serving temperature for Chianti and other lighter-bodied reds is with a very slight chill; about 55 to 60 degrees Fahrenheit. Flavors include strawberry, dark fruits, figs, tobacco, and herbs. The resulting wines are earthy, rustic, acidic, and only lightly fruity, so it's a wine that pairs well with plenty of foods, including many Italian-style foods such as lasagna, spaghetti, bruschetta, or pizza (think hearty meats and tomatoes, garlic, and oregano).

Some World-Class Chiantis to Try

The best way to understand Chianti is to drink Chianti. Recent vintages producing particularly good examples of the wine include 2010, 2011, and 2013. However, by far the best vintages in recent history for Chianti were 2015 and 2016. Both were hot years that created massive wines with powerful structure and tremendous aging potential. When you find wines from these vintages, don't pass them up.

This highly acclaimed wine is of top quality; Wine Spectator frequently gives it ratings above 90 points. In fact, the 2016 vintage received a whopping score of 94 points. Depending on the vintage, it usually costs around $40 per bottle, and it's fairly widely available from retailers such as Vivino.

Querciabella's Chianti Classico Riserva is 100 percent Sangiovese. It's also a vegan wine; no animal products are used in its production. It's a wine made to age; the 2015 vintage (which received 94 points from Wine Spectator) will be ready to drink in about 2024 through 2036. It's a limited bottling, so it may be a bit difficult to find in the United States, but if you can find it on secondary markets, it will cost you about $60. The Querciabella Chianti Classico is also well-received and even less expensive at about $30. Decanter particularly loved the 2015 vintage, giving it a 97 point rating while Wine Spectator awarded it a more restrained 92 points. You can find it at Wine.com.

The 2016 vintage of this wine showed particularly well, garnering 92 points from Wine Enthusiast and 91 points from Wine Spectator. It's a true bargain for a highly rated wine; you can buy this Chianti for under $20 at retailers such as Wine.com.

This is another solidly consistent Chianti Classico that's a real bargain. It costs under $25 per bottle, and the 2016 vintage received 93 points from Wine Spectator and 90 points from Robert Parker. It's a blend of 90 percent Sangiovese with 10 percent Canaiolo. Find it at Wine Deals.

This is a really good bottle of Chianti Classico Riserva for a great price. Villa Antinori is well known for making powerful Chiantis, and the 2015 vintage receives 94 points from Wine Spectator for about $30. Find it at Wired for Wine.

Check out the 2016 vintage of this delicious Chianti Classico. It's a ratings powerhouse, receiving 92+ point ratings from the likes of James Suckling (94 points), Wine Advocate (92 points), and Wine Spectator (95 points). Not bad for a humble $30 bottle of wine.

Tenuta di Bibbiano makes good Chianti at an affordable price. This is their top of the line, and it costs around $40 per bottle. The 2016 vintage received 96 points from Wine Spectator, a huge rating. Wine-searcher.com can help you find available bottles; it's worth the search.

Chianti is a powerful, eminently drinkable wine from Tuscany, Italy. With its bold flavors, it's the perfect wine pairing for pizza or spaghetti night, and it's always a great wine to order in an Italian restaurant even though it seldom arrives in a fiasco straw basket any longer.