Burgundy, also called Bourgogne, is a wine region in France that produces some of the most expensive wines in the world. The classic, Old World wines from Burgundy are considered benchmarks for the rest of the world.

If there's one thing you need to know about Burgundy, it's that it produces some of the world's best Pinot Noir and Chardonnay wines. Some producers also make a sparkling wine called Crémant de Bourgogne, and other wines may be produced from the region's four main grape varietals (the other two are Gamay and Aligoté).

Pinot Noir is the primary grape grown in Burgundy, and it is the red wine the region is most well-known for. Red Burgundies are 100 percent Pinot Noir with no other wine grapes blended in. Pinot Noir wines produced in the Burgundy region have a classic Old World style, expressing with great finesse. The wines are a reflection of the terroir; that is, the land where it is grown, and the wines produced there reflect a strong sense of place. No other Pinot Noir wine tastes quite like a red Burgundy. In these wines, you'll notice elegant flavors of cherry and dark fruits with hints of earth and florals. These aren't big, muscular Pinot Noir wines such as those you'll find from Oregon or California, but rather they open up to you slowly revealing an aromatic bouquet, deep complexity and richness on the palate, and smooth hints of spice and earth. 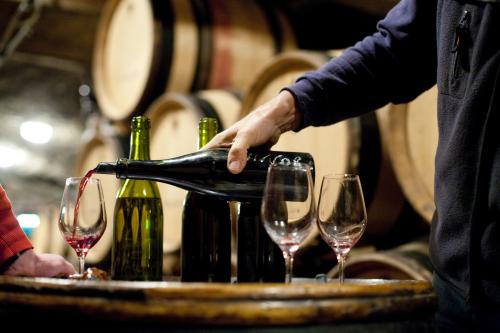 White Burgundy is made from 100 percent Chardonnay. Burgundy's Chardonnay has set the standard for the rest of the world, and it ranges from lean, mineral, and zippy when grown and produced in Chablis, to rich and buttery with tree fruit and melon notes and aromas when produced in Côte de Beaune. If you've never tried a white Burgundy, then doing so is a revelation; this is Chardonnay as you've never tasted it before as a pure expression of the place from where it hails.

Gamay is a red wine grape that is a distant cousin of Pinot Noir. It's best known for its use in Beaujolais and Beaujolais Nouveau, fruity red wines that are administratively classified as part of the Burgundy region, although Beaujolais is considered its own wine region. You will find varietal labeled Gamay wines from Burgundy's Mâconnais region, and it's sometimes in Crémant de Bourgogne. You'll also find wines labeled Bourgogne Gamay if they contain Gamay grapes grown in the Burgundy region. These wines may have up to 15 percent Pinot Noir blended in. They tend to be fruity and youthful with flavors of fresh red fruits.

Aligoté is a white wine grape. You won't find it in traditional white Burgundy wines, but it is in varietals from the region. It's a simple, easy to drink white that's meant to be consumed in its youth. These wines are labeled as Bourgogne Aligoté AOC or Bourgogne Aligoté Bouzeron. Aligoté wines can have up to 15 percent Chardonnay blended in. The wines are light and acidic, and they are often used to make a popular regional cocktail called kir, which combines Aligoté and crème de cassis.

A few other varieties of grapes are grown in the Burgundy region as well, including:

All sparkling wines in France made outside of the Champagne region and produced using the traditional méthode champenoise are labeled as Crémant wines. Some Burgundy winemakers produce their own sparkling wines called Crémant de Bourgogne. These wines may be white or rosé and are primarily made from Pinot Noir and Chardonnay, although some may also contain Gamay and Aligoté.

In order to understand wine from Burgundy, you have to know how Burgundy designates the quality of the wines, since this is a key to decoding Burgundy wine labels. There are four quality designations.

These are the top quality wines from the Burgundy region. The grapes for grand crus are planted mid-slope in Côte d'Or, where they receive the best and longest sun. There are more than 30 appellations d'origine contrôlée (AOCs), and they account for less than 2 percent of the total wine production in Burgundy. On the bottle, these wines will be labeled as Grand Cru, and they will not contain a village or commune name, but only the name of the vineyard. 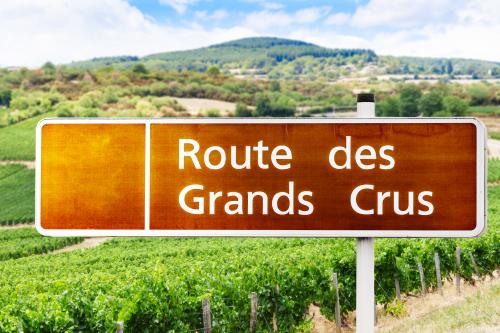 Slightly over 10 percent of Burgundy's wines are designated premier cru, which is the second quality tier. Generally, you'll find premier cru grapes planted on Burgundy's famed slopes but located at the top or bottom of the slope where the sun is more variable. These wines come from single plots known as climats that have been designated in an appellation or village. On labels, you'll find the name of the commune, the name of the climat, and the designation "appellation 1er cru contrôlée". There are more than 500 climats classified as premier cru.

Just over 37 percent of Burgundy's wines are designated as village or communal appellations. These are named for the village where the grapes are grown. There are 44 AOCs designated as communal appellations. On the label, these will list the commune but not the specific climat, so it might list something such as Mercurey, Nuits-Saint-Georges, or Pommard, for example.

Just under 52 percent of all wines produced in Burgundy are regional appellation wines. There are 23 AOCs that fit within this category, including the all-encompassing Bourgogne rouge (Pinot Noir) and Bourgogne blanc (Chardonnay) designations. These tend to be the most generic of Burgundy's wines, and they may contain blends from various climats and villages. On the label, you may see things such as Coteaux Bourguignon or Mâcon Villages, and this category also includes wines such as Bourgogne Aligoté and Crémant de Bourgogne.

The Bourgogne wine region is located in the eastern part of Central France. It has a wine producing area of roughly 300 km (186 miles) separated into five major subregions and 100 appellations. There are also more than 300 communes growing grapes throughout the region. In Burgundy, the prime vineyard real estate is on the hillsides. The main regions in Burgundy include the following.

This vineyard is located in the département of Bourgogne called Yonne in the northern part near town of Auxerre. It is separate from the other Burgundy wine regions in the far north of Bourgogne. It is best known for its crisp, white Chardonnays that have little to no oak. It has one grand cru appellation, Chablis Grand Cru, and a premier cru appellation, Premier Cru Chablis. These will be designated on the label.

Côte de Nuits is located in northern Bourgogne near the town of Dijon. Along with Côte de Beaune, it makes up the larger hilly region referred to as Côte d'Or. Here, the best wines are produced from grapes grown on the region's sunny slopes. There are 14 communes in Côte de Nuits with a number of grand cru AOCs: 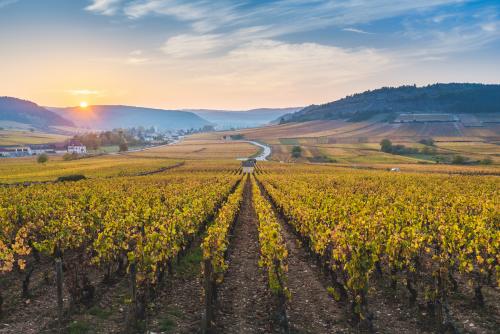 Named for the town of Beaune, Côte de Beaune is best known for its stellar white wines made from Chardonnay along with a few reds. It's located just south of Côte de Nuits and is the southern half of Côte d'Or. There are several grand cru AOCs here including:

Located just south of Côte de Beaune, Côte Chalonnaise makes both red and white wines and grows primarily Pinot Noir, Chardonnay, and Gamay. The region is hilly with relatively low rainfall. You won't find any grand cru vineyards here, although you will find several premier cru vineyards. The subregions of Côte Chalonnaise include:

Mâconnais is Burgundy's southernmost region; it sits south of Côte Chalonnaise and near Beaujolais. Here, grapes are grown on gently rolling hills, and Chardonnay is the primary wine produced, although you'll also find plantings of Pinot Noir and Gamay. One of the most well-known regions in Mâconnais is Pouilly-Fuissé, which produces Chardonnay.

According to Wine Spectator, some of the best recent vintages for white Burgundy include:

While Burgundy wines can be breathtakingly expensive, you can also find quality wines from Burgundy for people on a budget. Perhaps more than any other wines in the world, Burgundy wines reflect a sense of place. When you drink a wine from Burgundy, you can begin to understand exactly how terroir affects wine.