Best is a subjective term in wine. With so many fantastic Italian wines, it's difficult to select the top wines but easy to make recommendations for great bottles. Italy's wine industry cultivates a wide variety of red and white grapes that make tasty wines. The recommendations that follow are some of the best wines Italy has to offer.

Romano Dal Forno Amarone della Valpolicella comes with a hefty price tag; new releases of this wine usually come in around the $300+ mark, and the wine is highly sought after. But in terms of an Amarone della Valpolicella, you can't do much better than this. The Amarone from Romano Dal Forno frequently tops Wine Spectator's rating scales with monster ratings of 94 or above, making this a highly collectible wine. Top vintages include 2004 (drink or hold), 2011 (hold), and 2010 (drink or hold).

This Amarone from Roccolo Grassi costs between $50 and $80 per bottle as a new release, and it's usually rated above 90 points by major critics. Wine Enthusiast awarded the 2007 vintage 94 points, an excellent rating for such an affordable bottle of Amarone. Top recent vintages include 2006, 2007, and 2013.

This is wine-searcher's top Barbera d'Alba based on aggregate ratings across all vintages and critics. In simpler terms, what that means is this wine is consistently well-received and highly rated. It's a bit on the pricey side; in the US, you can mostly find the wine in large format bottles (1.5L or a magnum), which cost $250+.

At under $30 per bottle, the Barbera d'Alba from Giacomo Borgogno & Figli is a perfect, affordable Barbera. The wine typically scores in the 90 point range, a fantastic score for an inexpensive and drinkable Barbera.

There are many fabulous makers of Barolo and Barbaresco, each with their own take on Piedmont's epic Nebbiolo grape, so it's hard to choose the best. Currently, one of Wine Spectator's top rated Barolos ever is the 2000 Bruno Giacosa Barolo Le Rocche del Falletto Riserva. The 2000 vintage received a perfect score (100 points - drinking well as of 2019), and recent vintages also receive high marks. Other top vintages include 2001, 2007, and 2008, and James Suckling in 2019 notes the upcoming 2015 vintage for the Barolo region may be the best one the region has seen in years. The release price is mid-range for a Barolo; you'll pay around $150 or more but in return, you can expect a really good bottle of Barolo that will age for years. 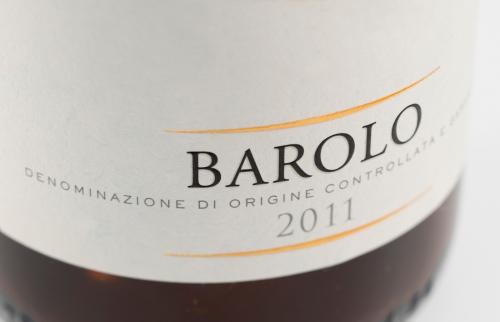 Barbaresco wines are made from the same grape, but they tend to be more affordable than Barolos and are often just as good. The Castello di Neive Barbaresco is a great example of this. The aggregate score for vintages of the Castello di Neive Barbaresco average around 90 points, and release price is about $40. The 2015 vintage earned a respectable 93 point rating from Wine Spectator and Wine Enthusiast, and you can buy it for about $37.

Brunello di Montalcino is a beautiful expression of Italy's Sangiovese grape, also found in Piedmont's bold and acidic Chianti wines. The Ciacci Piccolomini d'Aragona Pianrosso Brunello di Montalcino is one of those rare wines that is both uniformly excellent across vintages and highly affordable; the wine receives an aggregate rating of 94 points for all vintages, and Wine Enthusiast awarded the 2013 vintage with a huge 98-point rating. You'll find many sellers offering the highly rated 2013 Ciacci Piccolomini d'Aragona Pinarosso for around $65.

You'll find another example of how the Sangiovese grape goes from vine to glass in Piedmont's Chianti and Chianti Classico wines. The San Felice Il Grigio Gran Selezion is a consistently highly rated Chianti Classico, and the 2015 vintage received 95 points from Wine Enthusiast. Other vintages receive similar ratings (aggregate across vintages and critics is 92 points), and release prices hover around $40 per bottle. 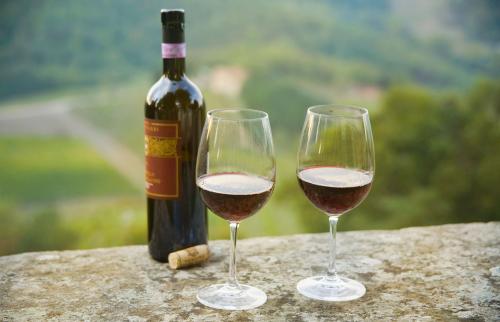 An acidic, citrus-scented white from Italy's Gavi region, Cortese doesn't produce super highly rated wines, but they're still worth a try if you want to truly get a taste of the wines that come from Italy. Beloved Barolo winemaker Pio Cesare makes one of the best examples; you'll seldom find a Cortese receiving ratings over 90 points, but Pio Cesare's comes close with aggregate ratings of 89 points. A bottle of Pio Cesare Cortese di Gavi will cost around $20.

Dolcetto is another wine that seldom receives sky-high ratings; it maxes out at around 90 points. And while the name means "little sweet one," most Dolcettos are dry. With an aggregate score across critics and vintages of 90 points, the Podere Ruggeri Corsini Dolcetto d'Alba is a great example of a Dolcetto d'Alba, and it's affordable at about $20 per bottle. 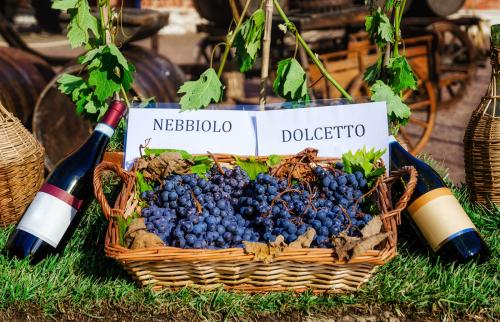 If you're looking for a fizzy and slightly sweet red, then Lambrusco is the Italian wine for you. Vine Pair's top Lambrusco for 2019 is the Cantina Della Volta Lambrusci di Modena Spumante Rosso, a sparkling deeply colored rosado (rosé) that costs around $30 per bottle.

The Masiciarellia Villa Gemma Montelpulciano d'Abruzzo consistently receives top scores from wine experts. For example, the 2011 vintage received a 95 point rating from James Suckling, and the new releases cost around $100 per bottle.

Moscato d'Asti is a light, off dry, and fizzy white without a lot of complexity. While it is a pleasant drinkable wine (particularly in the summer or for new wine drinkers with a sweeter palate), it's never going to pull in the big ratings. But that doesn't mean you shouldn't try it; it's really a delightful glass of wine. La Spinetta is a big name in the Piedmont region, making delicious, highly rated wines, and their Moscato d'Asti doesn't disappoint. Plus, it's only $20 per bottle, a great value for a quality wine.

The Santa Margherita Pinto Grigio Alto Adige is the most popular brand of Italian Pinot Grigio sold in the United States. At a cost of around $25 per bottle, it's light and consistently good from vintage to vintage.

Primitivo is Italian Zinfandel, and the wines it produces are just as zippy and alcoholic as the California version. You'll find bottles of the Gianfranco Fino Es Primitivo di Manduria from Puglia in the $60 to $90 range, and the aggregate rating of 91 points shows this winemaker's consistency from year to year.

Prosecco isn't quite like Champagne; you'll seldom find a knock-your-socks-off bottle of this light, sparkling quaff, but it's good fun and an affordable celebratory beverage for a crowd or as a mixer in mimosas. This vintage Prosecco from Ruggeri Giustino stands above the rest with an aggregate score of 89. Some years, such as the 2007 vintage, receive high praise from the likes of Wine Enthusiast. It'll cost about $30 per bottle. 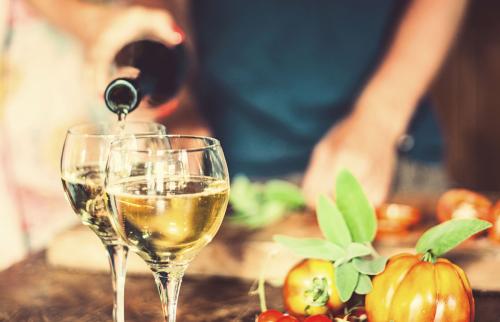 The Gini Soave Classico from Veneto costs just over $20 per bottle, but it is usually well rated for an affordable Soave. The 2016 vintage received a 90-point rating from Wine Spectator, so this is a great, affordable Soave to try.

Antinori Tignanello is considered one of the first, if not the first, Super Tuscan, and it's an excellent example of how blending Sangiovese with other red wine grapes such as Cabernet Sauvignon creates a beautiful, intense, balanced wine. Top vintages include 2016 and 2017, although virtually any vintage is bound to be highly rated and an excellent bottle of wine. It's a little on the pricey side at about $120 per bottle, but it's well worth the cost for a wine from one of the Super Tuscan pioneers. 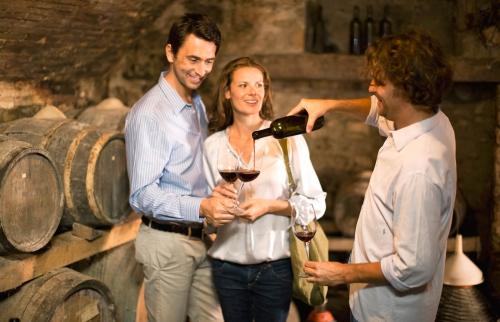 Decanter lists the Bucci Verdicchio dei Castelli di Jesi Classico Superiore as one of its top Verdicchios from Marche, giving the 2015 vintage a 94 point rating. At under $25 per bottle, that's a bargain. Give this zippy white a try.

According to Wine Spectator, these are the top rated recent vintages in Italy (as of July of 2019). Buying regional wines during top vintages is a good bet; chances are, you'll get a decent bottle of Italian wine.

The Best Wines Italy Has to Offer

Italy produces great Old World wines, and the above recommendations are among some of the best the country's winemakers have to offer. Regardless of your budget or preferences in wines, you're sure to find an Italian wine to suit your tastes.