Beaujolais nouveau breaks almost all of the rules of traditional wines, but every fall it is highly sought after for its fresh, fruit-forward flavors. It's not a wine to age; how you drink it is right in the name. Drink Beaujolais nouveau while it's "new" or youthful. This guide to the wine will tell you everything you need to know to understand and enjoy Beaujolais nouveau.

Beaujolais nouveau literally translates to new Beaujolais. The wine is made from Gamay grapes grown in France's Beaujolais region, an Appellation d'Origine Contrôlée (AOC) located in Northeastern France near Lyon. The region is also well-known for its traditional Cru Beaujolais wines, which are also made from the same grape but are a different wine altogether from Beaujolais nouveau. Beaujolais nouveau is a style of wine called a vin de premeur, which is a wine that is sold in the same year it is harvested. The wine is made and consumed to celebrate the end of the harvest. It is fermented for a very short time after harvest and goes on sale the third Thursday of November every year. This makes it a popular Thanksgiving and holiday wine in the United States.

How Beaujolais Nouveau Is Made

Beaujolais nouveau has a distinctive purple-pink color and a fruity aroma. The wine is meant to be consumed immediately and not aged like many other varieties of wine. The result is a fresh, light, vibrant, and fruity wine that tastes a lot like grape juice only better. It lacks the subtlety of an aged wine, but it still presents with fresh flavors of red fruits and berries. It also lacks the tannic bite of other red wines, which is why it doesn't age well - or at all. Without tannins, Beaujolais nouveau lacks the structure necessary to hold for more than a few months.

How to Drink Beaujolais Nouveau

Drink Beaujolais nouveau as soon as possible; you can keep it unopened until the new year, but it's best to drink it before the following May - a six month shelf life. If you age it too long, it will develop flat flavors with a distinct lack of fruitiness or even a heavy vinegar aroma. If the wine isn't zingy and fruity, you've waited too long. Skip drinking "old" Beaujolais nouveau; by May Cru Beaujolais and Beaujolais-Villages wines are available and have a bit longer shelf-life. 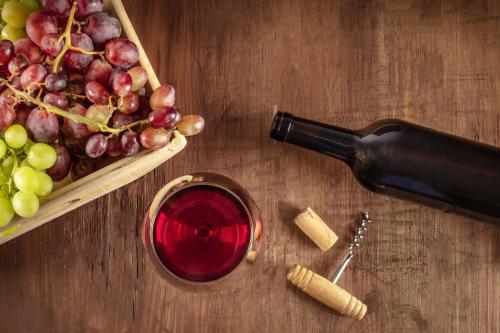 To get the best flavor, serve Beaujolais nouveau slightly chilled. Serve it at about 55 degrees Fahrenheit in red wine glasses. To get it to that temperature, place it in the fridge for 10 to 15 minutes before serving. Then, pop the bottle and pour. There's no need to allow the wine to breathe like you would other red wines, nor do you need to aerate it or decant it.

Beaujolais nouveau's food pairings are similar to those of other red wines. Cheeses, fruits, grilled chicken, roasted turkey, rack of lamb, and salmon, and shrimp all pair well with Beaujolais nouveau and will complement the wine's light and refreshing flavor. That means it's a great pairing for a traditional Thanksgiving dinner.

You'll find the wine on the shelves of wine shops and grocery stores shortly after the third Thursday in November. It usually sells quickly; most bottles are gone from the shelves by Christmas or well before, so buy it when you see it. The wine is quite affordable, costing between $10 and $20 per bottle.

Some of the best winemakers of Beaujolais nouveau are also makers of what is considered one of the world's greatest wines, Burgundy, because Beaujolais is a sub-region of Burgundy.

The Deboeuf family has been producing French wines for over 400 years, and Georges has been the chief winemaker of Les Vins Georges Deboeuf since 1964.

If you want to experience a unique taste in wine, wait until late November and discover the annual release of Beaujolais nouveau. This light wine will go great with your Thanksgiving dinner and will be a delightful treat for all your guests.