Barolo is a red wine made from the Nebbiolo grape in Italy's Piedmont wine region. It is considered Italy's greatest wine, and there are very few wines that can compare to the power of a good Barolo. Italy's Barolo wines are complex, tannic reds that can often be aged for 10 to 20 years, so they also make great investment wines.

The Nebbiolo grape is known for its powerful tannins and its bracing acidity. This is why Barolo has gained such a reputation as a wine that requires a long aging period before it is drinkable in order to soften the tannins. However, when the tannins soften with age and modern winemaking practices, there's nothing quite like a good Barolo.

Barolo is dry red wine made from Nebbiolo, a thin-skinned red grape that produces a brick red, light-bodied wine. Barolo is a moderately high alcohol wine with around 13 to 16% alcohol by volume (ABV).

Barolo has a light, floral aroma that belies its powerful tannins and brisk acidity. Rose and raspberry are prominent aromas when you first sniff Barolo.

While the aromas of rose and raspberry also permeate the palate of a good Barolo, this light-bodied wine has deep and powerful tannins that often require age to soften. The wine is also highly acidic. When consumed in its youth, Barolo's subtler flavors often hide behind the astringency of dense tannins, but as aging softens the wine, you'll experience a palate of raspberries, rose petals, cherries, spices, and earth.

For years up until the 1980s, achieving a great Barolo was an incredibly difficult feat. Because of the bitter and harsh tannins inherent in the grape, winemakers needed to age the wine in oak or chestnut casks for years, at least 10 and even up to 25, to ameliorate the tannins. This often left the wine oxidized and washed out the grape's fruit characters. This oxidation would be easily observed by the wine's brownish tint in the glass.

Modern Techniques Changed the Style and Character of the Wine

Winemakers using modern winemaking practices began changing the style and outcome of Barolo. They began to control temperature during fermentation and shorten exposure of juice to skins to help decrease tannin levels. They also began using smaller French oak barrels and bottling the wine sooner to preserve its fruitiness rather than letting it dissipate in the aging process.

The result is a Barolo with a lush and opulent character with its tannins if not contained, at least somewhat restrained. Nowadays, a Barolo is aged by law a minimum of three years with five years for a Riserva. That being said, it is still best to drink Barolo a minimum of five years after the vintage date.

Barolo is produced in Italy's Piemonte (Piedmont), which means land at the foot of the mountains. Those mountains are the Alps, and they wrap around this wine region on three sides. The specific region where Barolo is made is called the Langhe. It's a region of steep and rolling hillside vineyards dotted with small villages. Five villages represent the core of Barolo production: Barolo, La Morra, Castiglione Falletto, Serraluna d'Alba, and Monforte d'Alba. Barolo is classified as a Denominazione di Origine Controllata e Garantita (DOCG), the highest classification for Italy's wines, which are produced under strictly controlled growing and production conditions. Barolo represents the top of Italy's designated wine appellations, and one of its smallest. It's a tough and austere land with more than its fair share of cold weather and challenges for grape growers and winemakers. 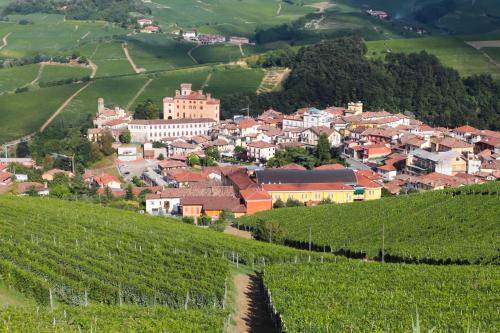 Nebbiolo is the single grape varietal in Barolo. It's a red grape that is probably named after a common phenomenon in Piedmont, nebbia. That's the word for fog that blankets the area in October. The big thing to know about Nebbiolo is that it's a roughhouse grape loaded with complex flavors but also packed with heavy duty bitter tannins. Nebbiolo is late ripening grape and if the rains and cold come early, then the Barolo grape doesn't have a chance to reach its potential. Vineyard positioning becomes critical and can make all the difference between an excellent and mediocre vintage. Consequently, you may find the terms, bricco, which means hilltop, sori, which means a hilltop with southern exposure, and costa, which indicates a hillside with sun, on Barolo wine labels. The more sun the better, and the best vineyards sit on the best warming plots of land.

In general, Barolo is produced as an estate-bottled, single vineyard wine. The majority are small family-owned wineries, but there are also negociants who blend Barolo from different vineyards in the region. The following is a short list of some of the best Barolo producers.

Cantina Bartolo Mascarello often sits atop lists of the best Barolo producers in Piedmont. While Mascarello himself died in 2005, his long-lived Barolo wines live on, and his daughter, Maria Teresa Mascarello, carries on his tradition of excellence in cultivation and winemaking. In fact, the Mascarello family has been producing Barolo wines for over 100 years, handing down the tradition from generation to generation. Both Forbes and Decanter place Mascarello atop their list of the finest Barolo producers in Italy.

Founded in 1921, Paolo Scavino is fourth generation family winery currently run by Enrico Scavino. The wines are consistently rated above 90 points by wine critics such as Wine Enthusiast and Wine Spectator.

The Conterno family bottled its first reserve Barolo in 1920, and the family has produced strong wines ever since. Giacomo Conterno took over the family business and his son, Aldo, founded his own winery, Poderi Aldo Conterno, in 1969 based on the strong family winemaking tradition. Giacomo Conterno's top Barolo wines are consistently highly rated, scoring above 90 by major wine raters, and Aldo follows in his footsteps with wines frequently receiving 90+ point ratings. In fact, the two together top the list of wine-searcher's the world's best Barolos.

Never drink Barolo early. If drunk too early, the complex flavors may be a no-show and leave you wondering what the big deal is about Barolo. To say the least, Barolo is a difficult wine to make well and not inexpensive. Because of the low production volume and lengthy aging required to make Barolo wine, the cost for a bottle will likely start at the mid-$40 ground floor range and rise like an elevator from there.

Barolo matches the food of the Piedmont, which is hearty, rich, and a carnivore's delight. You will find feasts of roasted game, veal, pork, and lamb dishes plus sausages, meat-based risottos and pastas, and polenta with everything. Add a full-bodied Barolo to the mix, and the chilly and foggy evening will vanish. Ahh, but one more thing. Piedmont is also the home to white truffles, the earth's retort to the sea's oysters. Be a hedonist and shave some earthy white truffle on top of that tagliatelle, pour a glass of Barolo, and smile about your La Dolce Vita. 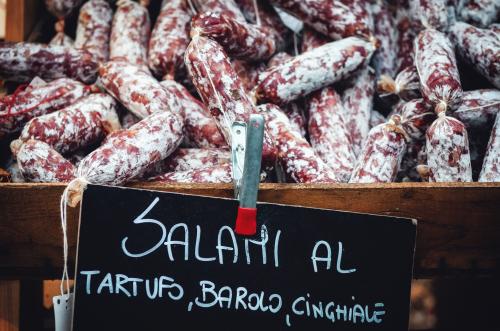 There aren't many wines quite like a Barolo. With its need for precise growing conditions, Nebbiolo is a grape that is difficult to get quite right. However, there are Nebbiolo wines that come from other regions that are slightly less expensive than Barolo including Barbaresco (also from Piedmont) and wines labeled as the varietal Nebbiolo. You can find respectable Nebbiolo wines from other countries, including some decent versions from Australia, California, and Washington State.

The King of Wines and the Wine of Kings

Barolo wines are known as the King of Wines and the wine of kings because of their consistent high quality, investment and aging potential, and bold, powerful flavors that reflect the region from which the wines come. While Barolo isn't an easy drinking wine, it's one all wine enthusiasts need to try at least once to understand how truly great a wine can be.