Malbec is a purple grape that originated in France, but more people may recognize it as an Argentinian wine. Although Malbec is still utilized in Old World wine, Argentina helped put it on the map.

Malbec originated in the Bordeaux region of France and is one of the red wine grapes allowed in the production of Bordeaux wines, although its use today is not that prominent. Malbec is a fickle grape and a bad frost in 1956 caused many vintners to give up on it. However, Malbec found its home in the area of Cahors, in southwest France. Cahors has embraced the grape, learned how to work with its nuances, and today, it's flourishing. Cahors even held a Cahors Malbec Days in 2014.

You might hear it referred to as the "Black Wine" and Cahors was granted its own Appellation d'Origine Contrôlée (AOC) in 1971. Under AOC laws, at least 70% of a wine must be made with Malbec in order to qualify for AOC status. According to Cahors, they produce 10% of all Malbec wines made worldwide, and as of 2013, the five leading import countries were Canada, USA, United Kingdom, Belgium, and China. You may see it referred to as "Côt," which is the local name for Malbec in Cahors.

Malbec Made in Argentina 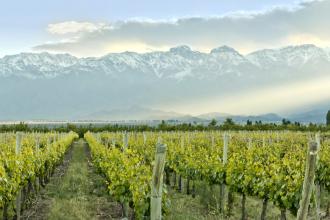 Malbec made its way to Mendoza in the 1800's, thanks to French agricultural engineer Michel Pouget, according to Wines of Argentina. In 1863, the Phylloxera Plague nearly wiped out all of the vineyards in Europe. Phylloxera was accidentally introduced to Europe from North America when infected grapes were taken to the Botanical Gardens in England. It turns out that several regions were resistant, including Argentina. As Europe struggled with phylloxera, Argentinian wine regions flourished. Argentina had original French Malbec vines prior to phylloxera and the wines produced today exemplify the French characteristics of the grape.

Today, Malbec is Argentina's "flagship" wine according to Wines of Argentina, and the country is home to the largest planted Malbec acreage in the world. Argentina boasts over 76,000 acres of Malbec vineyards, with the majority of them located within the Mendoza region.

Much like the AOC regions seen elsewhere in the world, Argentina has its own Denomination of Origins (DOCs). Wines of Argentina describes the characteristics you can expect to find from Malbec in Argentina:

Anyone who is into wine will tell you that terroir can greatly affect a wine. Terroir refers to the geographical factors that influence a wine long before the winemaker even touches it. Terroir is the soil composition, what altitude the grapes growing at (high on the mountain or low on the valley floor), how much sun they receive, what the weather is like, etc. The importance of terroir is definitely exhibited in Malbec wines as the taste of wines produced in France and Argentina vary greatly.

According to Wine Folly, the taste of Malbec from the two regions can be summed up as:

Wondering why there is difference? The limestone soils in the Cahors area of France help give Malbec the dark fruit and tannic qualities, whereas the bright sunshine in Argentina's Mendoza brings out the grape's fruity characteristics.

France and Argentina aren't the only producers of Malbec wines, but they are certainly the biggest ones. You'll also find Malbec in Chile, New Zealand, Australia, South Africa, and North America.

How to Drink Malbec Wines

Some Malbec wines can be aged, and you can always ask the producer if it doesn't designate aging time on the bottle. In general, unoaked wines should be consumed quickly, while those aged in oak may keep for several years.

Foods to Pair With Malbec

It probably comes as no surprise that Malbec wines pair great with steak, given Argentina's love of meat. Food and Wine came up with a list of specific Argentine foods that pair well with Malbecs. A few of these include skirt steak with Chimichurri sauce, grilled chorizo, and Veal Milanesa. Malbecs are hearty wines so don't be scared to pair them with heavy grilled meats and BBQ.

The proper temperature at which to serve a wine is always up for debate and personal interpretation. Red wines should be served cooler than a lot of people realize. Gascon Wine suggests serving your Malbec wine between 59 and 64 degrees F.

A few Argentine and French Malbec producers are noted below that make a nice range of Malbec wines, from budget-friendly daily drinkers to ones you'll want to lay down in your cellar for a few years. If they don't appeal to you, check out recommended Malbec wines from both France and Argentina from BKWine Magazine publishers Per and Britt Karlsson via Forbes. 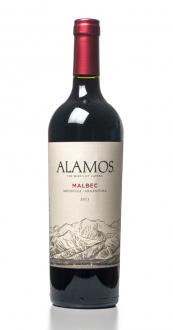 Bodega Catena Zapata produces some fantastic Malbec wines in a wide range of prices. Catena wines are available around the world, making it an excellent producer to seek out. You can pick up less expensive Catena Malbec wines online for under $20, while older vintages of 90+ rated wines like Catena Zapta Nicasia can fetch over $100.

Domaine Bousquet combines the best of France and Argentina -- the Bousquet family is from Carcassonne, in the south of France. They bought land in Tupungato (Uco Valley), which sits 4,000 feet above sea level. It's one of the higher altitude vineyards in Mendoza. And, their wines are sold in over 45 countries so you won't have any trouble locating one of their Malbecs. For a real treat, try the Ameri Single Vineyard, made with 65% Malbec, hand-picked, and aged for 16 months in new oak; a 2011 bottle will set you back an affordable $35 or so.

Domaine La Berangeraie is family owned by the Beregner family who relocated from Champagne. Their children Maurin and Juline joined them, along with their spouses, and they produce some fantastic Malbec wines. They do everything in the Domaine themselves, including pruning, organic treatment of the vines, and hand-harvesting, a practice nearly all done by machine today. You'll note some of the wine names sound familiar -- Juline, which is 80% Malbec, 20% Merlot, and Maurin, made from 100% Malbec. Average price is around $16 for these wines.

If you're like many others who have become entranced by the world of Malbec Wines, you'll want to mark April 17 down on your calendar. That's annual Malbec World Day. It's celebrated all over the world and you can search for events in your area. While the day primarily celebrates Argentine Malbec, you can share in the fun by drinking a Malbec produced anywhere in the world. Just be sure to include the hashtag #MalbecWorldDay.

0
Comments
© 2006-2020 LoveToKnow, Corp., except where otherwise noted. All Rights Reserved.
Resouces, Advice & Tips for Covid-19
Read More
Everything You Need to Know About Malbec Wines