While Korea is typically synonymous with the alcohol known as soju, there is also a small wine culture that includes both rice wines and fruit and/or herbal fermented wines. A few of these are exported, and you can either purchase them online, or at a Korean specialty store if you're lucky enough to live near a Koreatown. 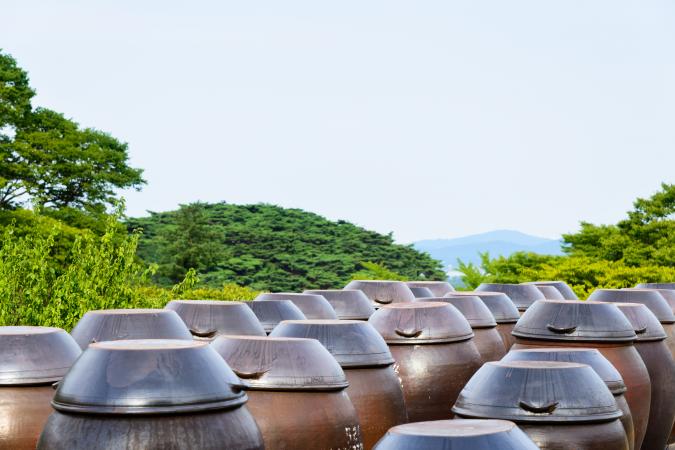 Makgeolli, also known as makkoli or makgoli, is a milky rice wine that has regained popularity in South Korea recently. It is the oldest alcoholic beverage in Korea, dating back to the 10th century and the Goryeo Dynasty. Characterizing makgeolli as a wine is a bit misleading as it's not what you would classify as a traditional wine. It's not aged, nor does it get better with age. In fact, it should be consumed immediately.

How Makgeolli Is Made

Makgeolli is made from glutinous rice, barley, flour, and wheat, which is all steamed and mixed with yeast and water, and left to ferment naturally. It's unfiltered, so the appearance is milky, and the taste is slightly sweet, and may be a bit fizzy from fermentation.

It's typically low in alcohol (6-7%), and high in protein (close to milk), which led to its popularity with farmers and also women who are prone to skin rashes after drinking. For years it was known as "farmer's alcohol." After a decline in popularity in the late 1980's, makgeolli saw a resurgence after a food journalist, Yo-Yong Yi, opened a 40-seat makgeolli bar in Seoul in 2010.

Pick up a bottle of Il Dong Kong Makgeolli. Three versions - the other two are Il Dong Makgeolli and Il Dong Jo Makegeolli - are available for under $5 a bottle (375ml).

A Note on Filtered Rice Wine

There is also a filtered rice wine, called cheongju, which is made by fermenting polished rice and then filtering. It's a much higher alcohol content than makgeolli, but still contains far less than your average soju. Look for cheongju in specialty grocery stores.

Herbal and Fruit Options in the US

While some fruit wines are made with rice wine, many are fermented directly from the fruit. 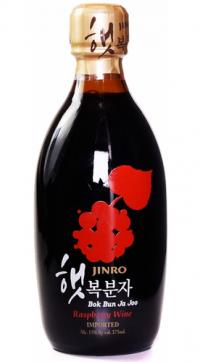 One of the most popular ones is bok bun ja, also known as bokbunja-ju, bokbunjajoo, or bokbunja wine. It is made from Korean black raspberries, known as bokbunja. It's made by fermenting the berries with water, while some varieties may contain rice and a Jicho herb. Bokbunja is typically made in Gochang County -- Jeollabuk-Do, in Damyang, Jeollanam-Do, and in Jeju Island.

It has a beautiful deep red color, with a relatively sweet taste. It can be served chilled, typically as a dessert wine, or locals consume it as a health drink. The bokbunja berry itself is believed to have medicinal qualities, used in herbal medicines and health supplements, designed to enhance stamina for men and cure diseases in women.

A couple to try include: 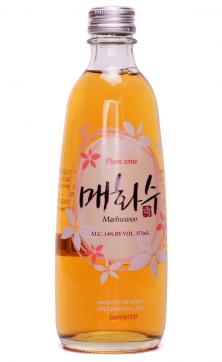 Another popular fruit wine is Seoljungmae, or plum wine. It's made with real, hand-picked plums. The green plum liquid is extracted at low temperatures and is chill-filtered for around 10 days at minus-8 degrees to maintain freshness. It's strong on the nose with mild taste of green plums. You may even find whole green plums in the bottle, which can be eaten as well.

Bek Se Ju is a rice and herbal wine, brewed with 12 herbs. "Bek Se Ju" means 100 years old, which refers to the wine's supposed health benefits. It's golden in color, with earthy potato and ginseng aromas, but lighter and a bit spicy on the palate and a fruity finish.

Some other types of Korean wines are well-known in Korea, but primarily available for purchase in restaurants and in person at specialty liquor stores or Korean grocery markets. 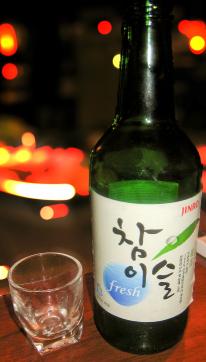 Some people classify soju as a rice wine, but it's "primarily made from sweet potatoes." The Japanese banned distilling soju from rice in the early 1900's when they annexed Korea. The ban was lifted in 1999, and a few higher-end distilleries have gone back to traditional rice methods, but the high alcohol content keeps them more comparable to a vodka rather than a rice wine. If you're looking to buy soju, you'll often find it listed with wines though. Soju is probably the most well-known of Korean liquors, and Jinro Soju was the top selling liquor brand in 2014 with 71 million cases sold.

Where to Find and Buy in the US

Some exports are making their way to specialty stores in the U.S., but it's still a very small market online. Unless you have the ability to visit a Korean grocery, you may have some difficulty tracking down a wide variety of wines online. If you're located near a big Koreatown, like Los Angeles, there are a number of liquor stores and markets that carry a good selection of imported wines. In fact, Time Out Los Angeles has a good listof the best Koreatown markets in LA.

Look for Korean liquors incorporated in cocktail menus, especially at new or trendy Asian restaurants. You may also find several varieties available at Korean BBQ restaurants as well. Or, you can even make your own wine cocktails at home. How about a makgeolli cocktail made with soju and fruit wine? Or, Food Pairing also has three interesting makgeolli cocktail recipes, including their version of a gin fizz made with makgeolli. No matter whether you opt to purchase the wines to drink straight or experiment with in cocktails at home, there's a good chance you'll fall in love with the subtleties and easy drinking of Korean wines.

4
Comments
© 2006-2020 LoveToKnow, Corp., except where otherwise noted. All Rights Reserved.
Resouces, Advice & Tips for Covid-19
Read More
Things You Might like to Know About Korean Wine