Choosing the best type of red wine for sangria can make a huge difference in the finished product. Medium-bodied and fruity red wines are a great choice, as they are some of the most food-friendly wines that work well when you add fruit, additional sugar, and other types of liquor. They also aren't too acidic or tannic.

Some of the recommended wines for sangria come from Spain, where Sangria originated. However, other wines from around the world work well, too.

Spain first introduced sangria to the United States at the 1964 World's Fair in New York. Not surprisingly, most people in Spain use Rioja or another Spanish red blend. Rioja is blended primarily from the Tempranillo grape. A light, fruity Rioja such as a Crinanza Rioja is a great choice for sangria recipes. Try the CVNE Vina Real Crinanza Rioja, which costs around $17 per bottle for a lush and fruity red.

Garnacha, or Spanish Grenache, has lots of ripe red fruit flavors and decent acidity. It is also low in tannins, which is a plus for the fruity sangria. Try the Campo Viejo Garnacha from Rioja, which costs under $10 per bottle and has lively fruit flavors such as berries and cherries.

Tempranillo is a Spanish grape, but you can find it in varietal wines from around the world. It is a dry red with fruity notes and moderate tannins that blend well into a sangria punch. Try The Fableist Tempranillo from California's Central Coast. It costs under $20 per bottle and has notes of blackberries and blueberries.

Beaujolais Nouveau is a young, fruity red from France. It is made from the Gamay grape and meant to be drunk in its youth without aging, so it has a very strong fruit character that is perfect in Sangria. Since Beaujolais Nouveau only comes out once a year in November, if you can't find one available, you can also use Beaujolais wine, which has some minor aging but still retains the fruit character of Beaujolais Nouveau. Try the DeBoeuf Beaujolias Nouveau, which costs under $10 per bottle with flavors of raspberry and cherry.

Bonarda may be a wine you aren't necessarily familiar with. It's originally from Italy, but much of it now comes from Argentina. It is still somewhat unknown, but some wine experts recommend this hidden gem for sangria. Expect a fruity red with notes of cherries and other red and black fruits. Try the Cruz Alta Bonarda Reserve from Mendoza, Argentina. It costs around $12 per bottle with notes of black cherries and berries.

With hundreds of recipes available for sangria, it really comes down to personal preference and what type of fruits and mixers you plan to add. Just remember, wines don't need to be expensive when making sangria. In fact, inexpensive wines are often better alternatives as you are using it as a base for a punch. 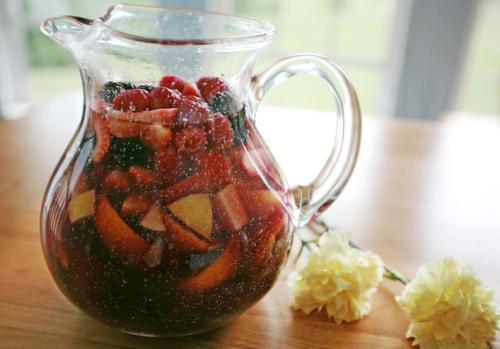 Choose a wine that you wouldn't mind drinking on its own. If you wouldn't drink a particular wine straight out of the bottle, it's not going to necessarily taste any better in a sangria.

The Best Wines for Sangria

Make the sangria the night before if you can, as this allows the red wine of choice to blend together with the additions. Chilling the wine ahead of time can help keep the wine from melting the ice too quickly and diluting the flavors.